Takeaways From The October Democratic Debate 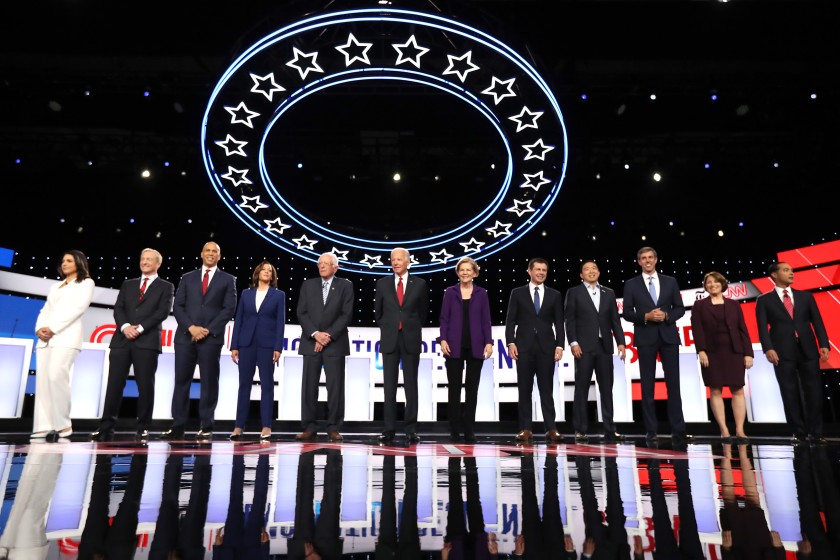 The latest Democratic Debates, which took place on October 15th, are over, and the stage dynamics have certainly shifted: Senator Elizabeth Warren of Massachusetts took continuous fire from her competitors, former Vice President Joseph R. Biden struggled to make waves, and Vermont Senator Bernie Sanders mellowed following his recent heart attack. Here are some main takeaways from the most recent debates:

During the previous debates, Warren often avoided animadversion; this debate, however,  Warren faced criticism from her rivals, a sign that she is now the frontrunner. Biden called her plans “vague”; Mayor Pete Buttigieg of South Bend, Ind., suggested that she did not trust the American people to effectively choose their healthcare; Minnesota Senator Amy Klobuchar called Warren’s plans a “pipe dream”; and California Senator Kamala Harris questioned why Warren refused to support her request to ban President Donald Trump from Twitter. In fact, these attacks seemed to throw Warren off her game. For a candidate praised for her highly-specified policies and political acumen, Warren stumbled when asked if her “Medicare for All” plan would raise taxes on the middle class, she obfuscated. She never answered Harris’s question about why she did not call to ban Trump from Twitter. For the most part, however, she survived these blunders. Overall, the debate solidified Warren’s status as a formidable enemy for the rest of the Democratic candidates.
Biden was a smaller presence on the debate stage this time around. While he remained at the center of the stage, other candidates did not attack the former Vice President, unlike during previous debates. It was both a sign of his diminished status, with his lead severely reduced and some polls placing Warren in the top spot for the Democratic nomination, and proof that being on the offensive against Biden has not worked for candidates that have tried it. Harris and former Housing and Urban Development Secretary Julian Castro both instigated personal arguments with Biden in past debates; in the first debate, Harris attacked Biden’s position on desegregation busing, which he previously fought against, and in the September debate, Castro criticized the former Vice President’s age.
After a widely-publicized heart attack, the oldest candidate on the stage, 78-year-old Bernie Sanders seemed calmer than he did during the previous debates. He still retained many of his signature “Feel the Bern” characteristics: he criticized billionaires, fought for Medicare for All, and said the word “damn” twice. His heart attack also served as a catalyst for a broader discussion about age and the presidency. This election cycle, which has some of the oldest and youngest candidates to ever run for president, has notably avoided the subject of age; however, this debate, the three oldest and three candidates who have steadily received the highest polling numbers, were questioned about their age. Sanders, Warren, 70, and Biden, 76, all viewed their age as an asset more than a liability. Biden said: “One of the reasons I’m running is because of my age and experience — with it comes wisdom.”
Mayor Buttigieg reemerged on the stage. During the third debate, the South Bend mayor drifted into the background; his moderate approach never brought him into sharp contrast with any of his more progressive opponents. This changed during this debate. Buttigieg differed greatly from former Texas Congressman Beto O’Rourke (who has since dropped out of the race) over guns. O’Rourke, who previously represented El Paso, TX and has been a major advocate of gun control since the shooting in his hometown in August, clashed with Buttigieg over gun buy-backs. He also sparred with Hawaii Congresswoman Tulsi Gabbard over American presence in Syria. Gabbard characterized the war as “regime change” and argued that America should have never intervened in the first place. Buttigieg, on the other hand, claimed that the current crisis in the area is a result of President Trump’s decision to abandon Kurdish forces.
What about everybody else? Sen. Harris and Senator Cory Booker of New Jersey faded into the background, failing to pick up the steam that would catapult them into the top tier of candidates. The other low-polling candidates, like entrepreneur Andrew Yang and billionaire Tom Steyer, continued to flounder, as the debate really narrowed to the top four candidates: Warren, Biden, Buttigieg, and Sanders. The most contentious and substantive exchanges of the night took place between these four, who are also the leaders of the two democratic factions: Biden and Buttigieg on the moderate side, Warren and Sanders leading the progressive flank of the party. While cementing their status as the favorites for the Democratic presidential nomination, Biden, Buttigieg, Warren, and Sanders also foreshadowed what is to come as the field of candidates shrinks.