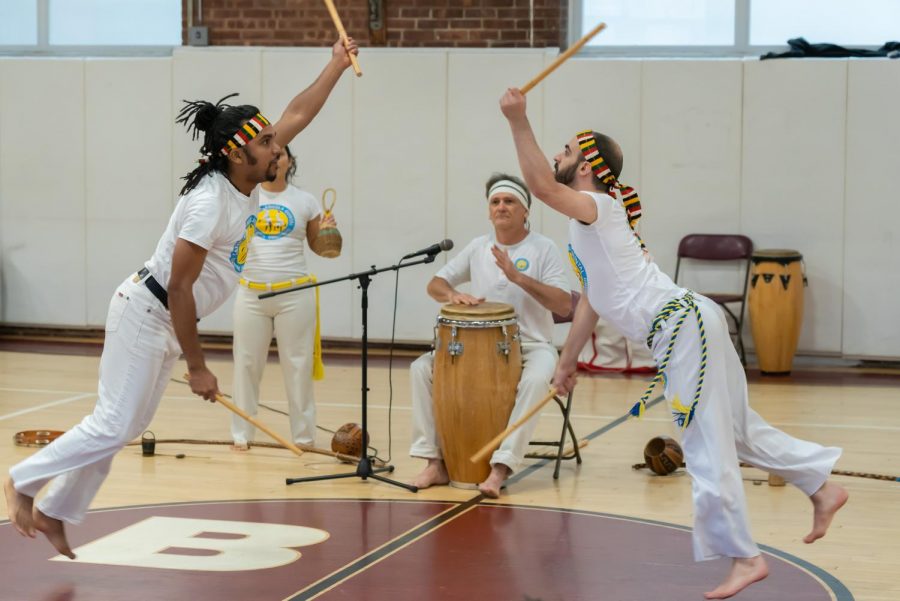 On October 17th, Berkeley Carroll hosted its first BC Talks of the year. Organized by the LatinX Affinity Group, the talk included a guest speaker, a workshop, and a capoeira group. Alba Martinez, an organizer of the event, said that this BC Talks was spawned from a desire to have people “expand their knowledge on latinidad and to bring awareness on diversity both as Latinx people and as a community.” Alba also stated that she was proud of the day’s workshops: “I was very proud of the many people that volunteered to facilitate workshops too. The diversity of the people who facilitated workshops represents how you do not need to be part of a specific group of people in order to be proactive.”

The day’s workshops included a discussion about surrealism, telenovelas, and the Southern border. Continue reading for an in-depth description of individual workshops, written by the staff of The Blotter.

Irene Madrigal: What was Surrealism in the Americas? – Ms. Nguyen and Mary DeSouza

During this workshop, students learned about artists in the Americas that in their works of art practiced surrealism. Surrealism is a 20th century avant-garde movement in art and literature that sought to release the creative potential of the creative mind, stressing the subconscious or nonrational significance of imagery. Generally, surrealism is thought to have been brought to the Americas by European artists fleeing from war, when in reality, surrealism in the Americas was a creation of the people who lived there. Notable artists that we explored were Diego Rivera, José Clemente Orozco, and Rufino Tamayo. Afterwards, every student was given an outside image of The Berkeley Carroll School which they used to create their own piece of artwork inspired by surrealism. Through the usage of construction paper, pipe cleaners, and markers, the students brought elements of their individual lives to a space that everyone shared. At the end, Mary and Ms. Nguyen challenged us to come up with our own definition of surrealism, based on our life experiences.

We  learned about the history of telenovelas, their popularity, and explored their impact on American perceptions of Latin and Spanish speaking communities. Particularly, we looked at the lack of dark skinned leads and hypersexualization of women. One of the examples we looked at to see the impact of telenovelas on American perception was the America scene in West Side Story. The Puerto Ricans are played by white people who put on exaggerated Spanish accents, which we speculated may be a result of the majority of light skinned actors in telenovelas. Maya, Samantha, and Mr. Pena encouraged us to be critical of telenovelas and how they portray different communities.

The focus of this workshop was the 2019 protest/movement against the former governor of Puerto Rico, Ricardo Roselló, that ultimately lead to his resignation. Mr. Correa went into detail about the sexist and homophobic text messages that sparked the protests, as well as Puerto Rico’s long history of being a key American colony, and how the limitations placed on the island by the US. One example is the Jones Act, which prevented foreign ships from docking in Puerto Rico, and has caused the corruption and poverty that the island experiences today. Although the protests were only against Ricardo Rosselló, they also show a Puerto Rico that is increasingly fed up with American imperialism. As Mr. Correa pointed out, the political climate on the island is too chaotic at the moment for the idea of statehood or independence to be put forth, but the people of the island are tired of the current political milieu.

Our workshop was facilitated by Mr. Sanchez and revolved around the topic of Santeria (also known as Lucumí) and Nigerian Ashe. Santeria is a religion with Afro-Cuban roots. We learned about the presence of African influences in Santería, and how those who believe in it used a mix of various cultures to express their faith through music. We also talked about the seven Orishas of Santeria, which were Legba, Obàtálá, Yemayá, Oyá, Oshun, Chàngó, and Ogun.

Our workshop was centered around the empowerment of indigenous populations in Latin America through different types of media. We heard about four different ways in which indigenous populations were represented, throughout movies, visual art, and even reality TV. Such examples included how Isabel Moner, the actress who played Dora, spoke Quechua rather than Spanish in the movie. Quechua is a language natively spoken in Ecuador and the Andean highlands by the indigenous populations. Another way of representing indigenous populations was through photography. Citlali Fabián had a series of photographs in which she only featured Indigenous women. This brought a sense of empowerment and attention to the community, especially since the photos were spread around the world. Using a modified 19th century cameras, Fabián provided a certain aspect of an old photo, but with the quality of a new camera.

Felipe Brik and Sam Otley: What’s Going On At the US Mexico border

Our workshop was centered around recent information based around what is happening at the US Mexico border. We were separated into groups and worked together to answer a question that was on the piece of paper in the middle of the table. An example of one of these questions was “What does it mean to seek asylum?” After working in groups, we were allowed to walk around the library and choose new articles to read about the border and the process of immigrating. After reading our articles we looked at what other people answered the original question.

In this BC talk we talked about the history of Baseball in Latin America. We talked about the segregation of Latin players in the MLB. We saw the difference from early baseball to modern day baseball. Specifically, we looked at the Boston Redsocks. Years ago the Boston Red Socks were the most segregated team in the MLB; now, they are way more accepting. We also talked about one of the most influential baseball players, Roberto Clemente. He was an idol for many people in the LatinX community. Kids and adults alike looked up to him. He was the first person in the LatinX community to be enshrined. To this day, baseball fans and members of the LatinX community admire Clemente.

This workshop discussed the recent environmental crisis: the burning of the Amazon Rainforest. First we talked about what part is burning. The fires are currently travelling North, but with the new highway the government is building, the deforesters could start fires in the heart of the rainforest. Next, we talked about the Brazillian government’s reaction to the fires. The president of Brazil, Jair Bolsonaro, is currently rejecting money to stop or repair the damage of the fires. Finally, we discussed the effect of these fires on the indigenous communities of the Amazon by watching a short video where members of those communities talked about how the government has destroyed their environment by taking their land away. Now, more indigenous communities’ land is being destroyed by the fires and the Brazillian government has no desire to stop it.