Faith and Justice: BC Talks Episode 1 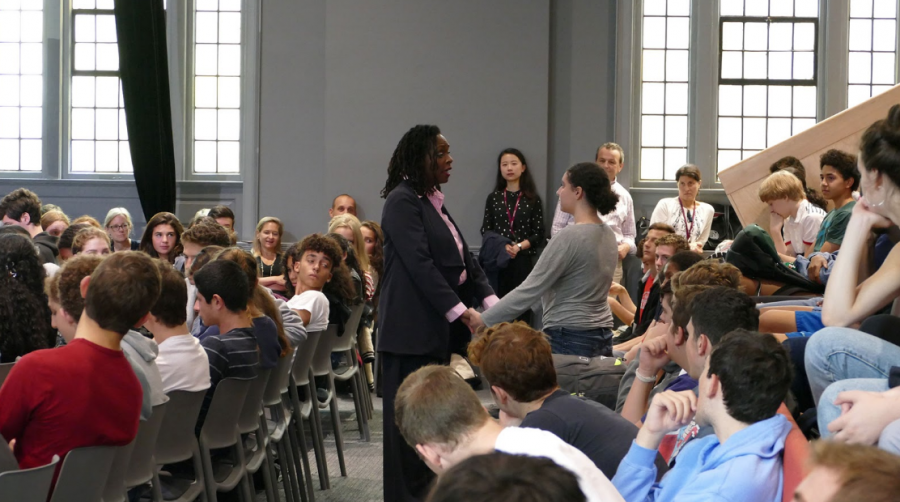 In this episode of BC Talks, Reverend Jacqui Lewis, from Middlechurch, came in to talk to the Berkeley Carroll students and faculty about what religion is and how it affects people. We went around the school interviewing students about their views on the talk: good or bad.

We talked to Ms. Moore about why the committee chose to talk about religion and why Rev. Jacqui Lewis was chosen to speak. First of all, the decision makers for BC Talks thought that we should incorporate a religious aspect because religion has not really been touched on in our school. To avoid controversy, Rev. Lewis talked about religion in general instead of focusing on one. For example, she talked about how all religion is “love”.

Rev. Lewis is very involved in faith and justice and her perspective was welcoming and inclusive to everyone. She also talked about her perspective on the intersection of religion and social justice.

We first interviewed Joseph Gordon and asked him some general questions about the talk.

Q: “What was your first reaction to this BC Talks?”

Joseph: “I think it is important that we help open people up to new subjects and topics and aspects of life that that may not have known about otherwise.”

Q: “Does the speech change your view on how religion plays a role in your life or the schools?”

Joseph: “The speech didn’t change my view personally, but that being said, it allowed me to see how other people have different perspectives.”

Q: “Did you think that this experience left a positive outlook on the BC community?”

Joseph: “I think so. It sure didn’t leave a negative outlook because it taught people more about religion and how we view that sensitive topic.”

Q: “Would you think it would be beneficial for Rev. Lewis to come back again?

Joseph: “For me personally, I think I would get more out of having a variety of different speakers. However, I would love to hear Rev. Jacqui Lewis speak at the school again. Overall, it was a great experience for me and for the school.”

We then interviewed Ms. Prescott about any concerns for BC talks.

Q: “Was there any concern about bringing in a religious speaker for BC talks?”

Ms. P: “From my perspective, I wasn’t concerned because I knew the background. She worked with interfaith. She believed we should all be communicating about religion. I think when religion comes up in private school, a red flag is suddenly thrown. It was good for us to look around the room and see the different religions. I wasn’t concerned.”

Q: “What would be your response to students seeing the BC Talks an encouragement of Christianity.”

Ms. P: “What I would say to them  is tell me what in her speech made you feel like you were being converted. I would give them evidence why that wasn’t the case. Culturally, I hear more about the Judaic religion here. If some students came into it with tunnel vision, I would show them that it is not focused on one religion. No one should feel like they are being converted.”

Through talking to students and faculty, we heard the positive and negative opinions about the BC Talks . BC Talks has been and will continue to be a great chance to experience and learn about topics that might not be familiar to upper schoolers.