9 to 5 and Women in the Workplace Today 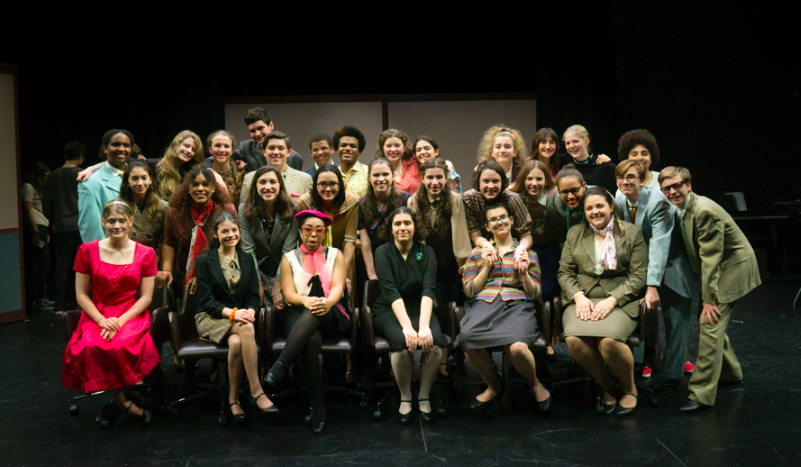 After months of hard work, the Berkeley Carroll  theater team put on their production of the musical 9 to 5. 9 to 5 was released in 1980 and tells the story of three female secretaries, Violet, Doralee, and Judy, that are undervalued and mistreated by their misogynistic boss, Mr. Hart. One day they seek revenge and kidnap him, taking it upon themselves to improve their workplace. For those of you who missed the musical, it was both provoking and humorous in the way the women were treated and acted in the workplace. The actors fully embodied their characters, making the audience laugh out loud at times and gasp with shock at others. The costumes (done by Orli Nativ)

, blazers and tweed print, and sets were beautiful and true to the time. The tech crew was able to bring everything together, helping to seamlessly transition from one scene to the next. The set really transported me, and the rest of the audience I’m sure, to the 80s, a time where I was not even born yet. The cast also raised money through bake sales and collected gently used clothing for Dress For Success which is an organization that provides professional clothing and job-search and interview support for low-income women. Although this musical was created in 1980, it is still frighteningly relevant to the lives of women today.

A scene with a clear relevance to our world today is Act one, Scene 3- Franklin Hart’s Office. In the scene, Doralee is being harassed by Mr. Hart. Since the other women in the office dislike Doralee, she does not get the chance to speak up for herself. This is similar to the Times Up Movement. Recently, women in Hollywood have been speaking up against having been sexually harassed previously on jobs in the entertainment industry. The Times Up Movement aims to put an end to sexual harassment and create gender equality in the workplace. You may have noticed many people wearing black at The Golden Globes this year; this was to stand in solidarity with women and to stop sexual harassment and inequality in the workplace. It was clear that Mr. Hart saw Doralee as nothing more than a trophy to be won. His lack of respect was evident when he purposely spilled his cup of pencils so she would bend down and pick it up. This lack of respect is still affecting women today as shown by the need a movement like Times Up Movement.

The inequality women face in the workplace also affects their opportunity, which is the concept of a glass ceiling. In Act 2, Scene 1- One of the Boys, Violet sings about extravagant and ambitious dreams such as being a CEO. The name of the scene itself shows the male dominance in positions of greater power; if equal opportunity was given to both men and women this would not be the case. The glass ceiling is a transparent barrier between women and positions of higher power.  Just like when the musical first came out, these positions are still typically dominated by men. The glass ceiling rests upon the idea of equally qualified women not being given the same opportunity to certain jobs as men. In Violet’s case, she was infuriated by having to see men that she trained be promoted despite her being more qualified. This scene is a ideal scenario where she has broken through the glass ceiling and was able to become and be accepted as “one of the boys.”

Despite it having been created in the 80’s, 9 to 5 still reflects the lives of women today. The production has been a reminder of how long women have struggled for equality and emphasizes the need for movements like Time’s Up and call for the acknowledgement of concepts like the glass ceiling. If we have moved on from typewriters to laptops with built in Artificial Intelligence services, why do women still suffer from the same inequality and harassment in the workplace that they did more than 30 years ago?