What is Wrong with the Thunder? 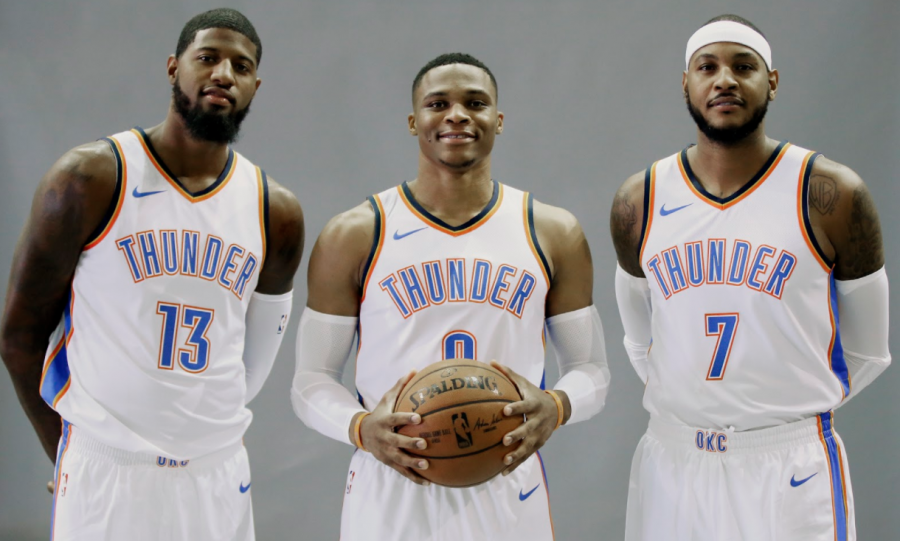 Over this past summer the NBA changed… a lot. Many players went all around the country, switching teams at an alarming rate. It felt like every day one superstar had left his situation for another supposed “better” situation. Two of the biggest moves of the summer were the trades of Paul George and Carmelo Anthony.

Paul George was the 10th pick of the 2010 NBA Draft and was selected by the Indiana Pacers. Since then, he has been selected for the NBA’s Most Improved Player Award (2013), the NBA All-Defensive 1st team (2014), the NBA All-Defensive 2nd team twice (2013, 2016), the All NBA 3rd team 3 times (2013, 2014, 2016), and the All-Star Team 4 times (2013, 2014, 2016, 2017). George had earned many accolades playing for the Indiana Pacers and made the team one of the most Elite in the Eastern Conference, even beating out LeBron’s Miami Heat for the number one seed in the 2014 Playoffs. However, in 2015 this all came to an end when George suffered one of the most gruesome injuries to ever happen on a basketball court. During a Team USA basketball scrimmage, George jumped up to try to block a layup and his leg hit the base of the structure that held up the backboard and hoop. This caused his lower leg to completely snap in half. He was carried off on a stretcher any many feared that he would never be the same.

After about 8 months of rehab, George finally returned to the NBA but he seemed a bit rusty and wasn’t playing too well. However, at the beginning of the next season, it was very clear that George was back and better than ever as he had career highs in many statistical categories. Despite this, one big problem that faced Indiana was that they no longer had any talent around George.

Before the injury, the Pacers were one of the best teams in the league and now they were barely making the Playoffs. The Pacers knew that George only had one year left on his contract and he had no motivation to stay in Indiana. Therefore, they traded him to the Oklahoma City Thunder in exchange for Victor Oladipo and Domantas Sabonis. The Thunder had just come off of an extremely frustrating season as they were struggling to succeed without any form of support to their star and 2017 MVP, Russell Westbrook. In the summer of 2016, the Thunder’s Kevin Durant left the team to sign with the Golden State Warriors which left a huge hole for them to fill. Now with George, they can finally pair Westbrook with another star.

When on the Denver Nuggets, Carmelo was not known as a winner. Although he had won at Syracuse and is currently the highest scorer in Team USA history, when it came to the NBA, Carmelo always came up short in the Playoffs. With the exception of the 2009 season, Carmelo hadn’t even won a playoff series and even in that season he still lost to the Lakers in the Western Conference Finals. He wanted a Championship and thus requested a trade.

In 2011 Carmelo was traded to the Knicks and was hoping he could bring New York its first championship in 38 years. Sadly though, things for Carmelo stayed the same as although he would have individual success, his team would always come up short in the Playoffs. Eventually, the Knicks started losing and not even making the Playoffs and Carmelo was getting really frustrated. He wanted out of New York so the Knicks traded him to the Thunder for Enes Kanter, Doug McDermott, and the Thunder’s 2nd round pick for 2018.

Now the Thunder have gone from a team with just one star, to a team that has three stars. In theory, this should make the team significantly better, because when they had two stars before, they were one of the best teams in the league, and when they had three stars (James Harden 2012), they reached the NBA Finals. This has not been the case however as the Thunder currently (as of 12/6) have a record of 11-12, which makes them the 9th best in the Western Conference. If the season ended today they would miss the Playoffs, instead being the 17th best in the league.

Some analysts tell Thunder fans not to worry, looking back to when LeBron first joined the Miami Heat in 2011 and they also had struggles for the first few months of play. That same Miami Heat team went on to reach the Finals all four years LeBron was with them and they even won two of the four they reached. Although the Thunder does not have LeBron, they do have a very good trio of stars who have lots of potential.