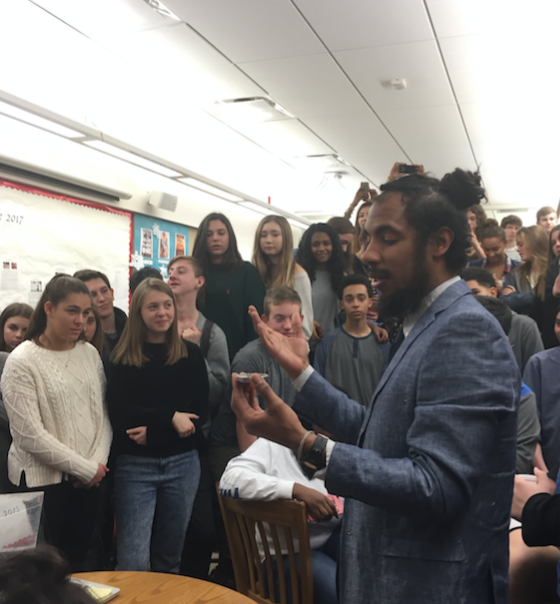 It’s been a while.  Happy New Year though! Can you believe we’re already, or only, a month into 2017?! Boy, has it been a whirlwind.  Here are a few things that I found interesting and/or exciting since the new year began:

When we got back from break, Tolu Roberts ‘17 announced that she’s reinstalling Table Talks in the cafeteria during lunch time.  For those of you who don’t know much about it, Tolu brought the program back from SEGL, the semester school that she attended last year.   She said she used Table Talks to get comfortable with people she was previously uncomfortable with and that her goal for the BC version of Table Talks is for us to “use the resources at BC better.”  Tolu also said that her expectation wasn’t for anything to change “on an individual level but on a cultural level” and that she “wanted people to be less questioning of others [who] approach them.”  I personally have yet to have a Table Talk but it is definitely on my bucket list going into my last semester of high school.

In other news, sophomores and seniors transitioned into their spring semester English and history classes.  As someone who loves humanities, the midyear switch was something I was looking forward to about senior year.  First semester I took Economics with Mr. Swarthout.  That class was very challenging, but also very enlightening.  It’s a combination of history, math and also science!  My English class was Coming of Age Novels, also called Coming of Age in the Novel, with Dr. Hughes; it was my favorite English class I’ve taken at BC hands down.  We read, discussed and analyzed some great stories (Dickens’ Great Expectations was my favorite) and finished the semester by writing our own coming of age memoirs.  This semester,  I’m in Mr. Corfield’s history class, the Age of Machiavelli and Elizabeth; the course has proven itself to be fascinating thus far.  My English class, Dr. Hughes’s Satan in Literature, is quite the investigation.

I spoke with Melina Scott ‘19 who took the history class Cultures in the Caribbean with Mr. Stein.  Melina said “it was really interesting because I’m from the Caribbean, but I didn’t know a lot about the history. [The class] made me aware of the slavery and mistreatment of the people who live there and I am going to be more conscious of that when I go to visit.”  Melina also took Women on the Edge with Ms. Heldring first semester and is now in Mr. Stein’s history class about South Africa and Harlem Renaissance with Mr. Sanchez, both of which she’s excited to be in.   The sophomore and senior elective classes are my favorite part of the BC curriculum because it allows us to specialize in certain areas for whole semesters.   I also love hearing about what my friends in different classes are doing and telling them what I’m learning about because, believe it or not, a lot of the themes in different classes connect to one another.

On Monday the 16th, MLK Jr. Day, I attended a discussion run by an organization called Hunger Free America.   There, I learned about the organization itself, the government’s role in ending hunger, and lots of surprising facts about hunger in America.   Did you know that 1 in 6 Americans is food insecure?  Hunger Free America was born out of the New York City Coalition Against Hunger whose mission was originally to help create long term solutions for solving the problem in addition to assisting emergency food providers.  The mission of Hunger Free America is now “to enact the policies and programs needed to end domestic hunger and ensure that all Americans have sufficient access to nutritious food.”  I left the discussion with an understanding I previously knew little about and a new sense of gratefulness for the food I am able to eat every day.  I am definitely considering doing service with Hunger Free America and would highly recommend that if you have interest in this kind of work that you check it out!

My favorite part of the new year, perhaps, was Rafael Sanchez Explains Donald Trump to a Cockroach, a piece of performance art which occurred in the Atrium on Thursday the 19th of January featuring none other than the English department’s very own Mr. Sanchez.   If you were able to attend the performance, you know that it was no small feat.  So many people gathered in the Atrium that there was a noticeable increase in temperature which made the performance all the more entertaining.  Every other person was documenting this uniquely captivating event via Snapchat or Instagram.

He began by removing the roach from its three walled container.  The roach sat still, because it had died on the commute from Mr. Sanchez’s house, on the lid of a jam jar as Mr. Sanchez toted it around the room speaking about how the two met a few days prior.  The pair made their way through the crowd, traversing up and down the wooden tables and chairs, swivelling between students.  Statements about human history, fascism, and Einstein’s brain wafted in our ears along with a classical music soundtrack.  We were all expecting the mood to dramatically shift into a rant about the new president but it never did.  This was Mr. Sanchez’s intention “to approach a sound and succinct explanation of Trump, but never get there,” What he was proclaiming to the roach was meant to leave us in a state of reflection.   I, for one, was left thinking Trump is nothing but a product of the emotions of our current world; we created this monster and it’s up to us to bring him down.  The performance art piece was brilliant because it was intriguing, unusual, and it generated discussion and wondering.  And even though the cockroach was dead upon its arrival at BC, its impact will certainly live on in our community.

Speaking of dead things, both Hewitt and Brooklyn Friends were recently crushed by our Girls’ Varsity Basketball team!  Captain Leah Ross ‘17 is very happy with her team and is stoked about what the rest of their season holds.  Their JV counterparts have had a rocky start but if you speak to any of them, you won’t hear even a hint of discouragement in their voices.  Both of the Boys’ Basketball teams have been working hard in all of their games.  Lukas Yurasits ‘18 made a strong comeback in early January after fully recovering from a wrist injury.   My co Peer Leader Jeffrey Hudson ‘17 has been soaring to the net consistently, landing dunk after dunk after dunk (he’s awesome 🙂 ).  The swim team has been making strides, or strokes rather, in the pool too.  As always, they’ve been swimming their hearts out and breaking records left and right.   Hannah Schneider ‘19 even beat the 9 year record for the Girls’ Freestyle 50m on January 14th!!  Here are the dates for the Senior Nights for each of our Winter sports teams (everyone should try to be there to show support for our amazing senior athletes!)

I hope you found it made you feel not only informed and interested but also invigorated and proud of everything that’s happened at BC in only a month! Thanks for reading and as always, stay classy, Berkeley Carroll.