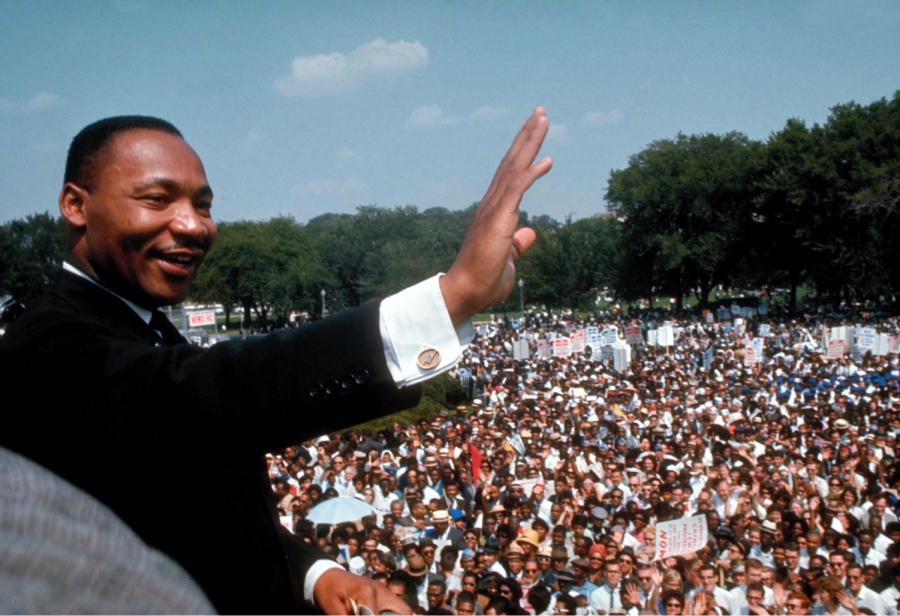 Martin Luther King Jr. giving his “I Have a Dream” speech at the March on Washington in 1963.

On Friday, January 15th, Berkeley Carroll held a BC Talks event in honor of Martin Luther King Jr. Day. In lieu of the normal class schedule, the Upper School attended a series of meetings and workshops to honor the work Dr. King has done.

In an opening assembly presented by Ms. Ashley Finigan, we learned about how Stevie Wonder promoted “MLK Day” to pay homage to Dr. King. When Wonder first went to appeal to Congress, the concept of MLK Day was rejected due to state laws, as well as the widespread belief that King’s ideas regarding race in America were too similar to socialism—a sentiment rooted in the rampant racism of the 70s. Although the process of getting MLK Day nationally recognized took 15 years, Wonder saw it as the “right thing to do.” In addition to making MLK Day a federal holiday, Wonder also wrote his song, Happy Birthday, as a way of throwing a “world party” for Dr. King and encompassing the joy and pain of trying to keep alive the legacy of an activist gone too soon.

The following keynote address was presented by Dr. Mecca Jamilah Sullivan, an author and professor with degrees in English Literature, Creative Writing, and Afro-American Studies. Dr. Sullivan’s presentation focused on joy and pleasure as well as identity and language. She cited hip hop as a genre that explores what it means to relish moments of joy and pleasure throughout our daily lives, as well as a form of political and personal expression—especially for Black people. This is a point that is made especially clear in the interview we watched during Sullivan’s presentation, in which Afro-Latina artist Nitty Scott discusses her inspirations in music and how the lyrics of her favorite songs have encouraged her to make her own music and uplift her fans in a similar manner.

Dr. Sullivan also elaborated further on what it means to use language with intention, with some examples being the work of artists like Nitty Scott, Audre Lorde, and many others who center intersectionality, freedom, pleasure, and joy while building on the ideas of activists before them. Like Lorde, she believes that language should be repurposed and that it can’t be “wasted.” As all language is fluid, Sullivan rejects the idea that we should stick to one rigid label to define ourselves, instead insisting that we do not exist in monolithic identities and should use as many words as we need to express all aspects of who we are.

The final all-Upper School assembly of the day was a lesson by Ms. Amber Thomas. Ms. Thomas’s lesson covered Critical Race Theory (CRT), which, unlike many widely accepted theories used in STEM fields, can’t be experimentally proven. In humanities, statistics can be used, but they can’t necessarily prove anything about a specific race or ethnic group. After examining various colleges’ descriptions of courses based on this theory, we found that most definitions highlight its focus on how racism is implemented in society, as well as its effects on the formation of oppressive institutions, the hierarchy within the legal system, and American law. CRT was started by lawyers such as Derrick A. Bell and Kimberlé Crenshaw to examine cases that largely affected Black people but were neglected by the American legal system, hence its particular emphasis on the legislative aspects of racism.

To end our BC Talks on a more conversational note, we were allowed to choose from seven groups—Sports, Film, Science & Medicine, Environmentalism, Video Games, Technology, and Fashion Industry—to engage in discussions about how CRT can be applied to various societal topics. These topics were examined through “artifacts,” or articles about how racism affects each subject. Finally, prior to a brief closing assembly, we attended affinity groups to consider what we had just learned and think about how these new perspectives may play a role in our daily lives both within and outside of the BC community. Overall, the day was very thought-provoking, and I believe many of us had significant takeaways from all the meetings that took place.