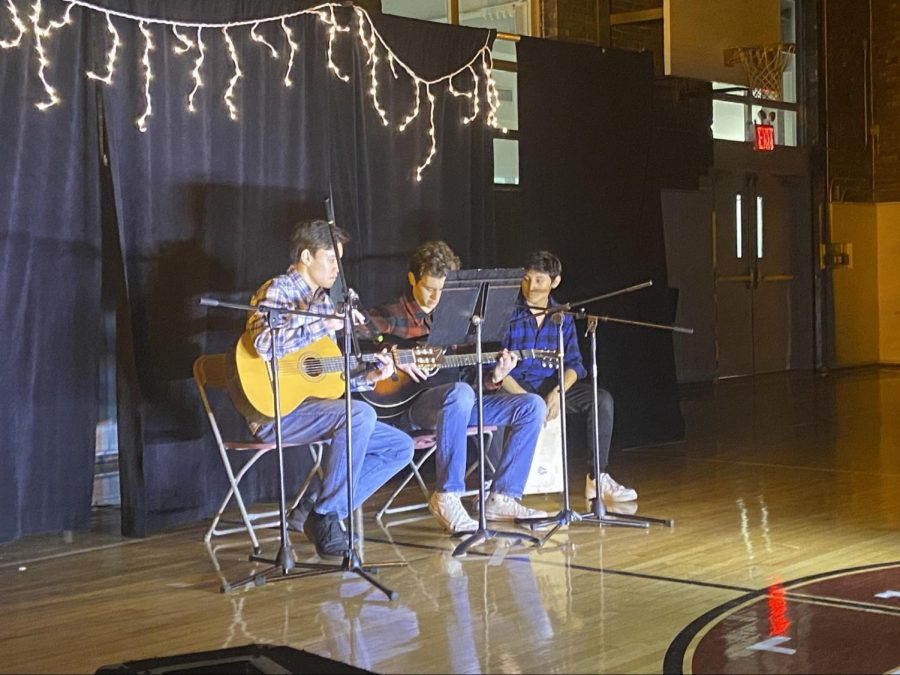 On January 31st, the annual Junior Variety Show took the stage. Or rather, the makeshift stage constructed in the 181 gym. This year, the event was put on by the Class of 2021, and featured music, acting, and roller-skating.

This year’s Junior Variety show was hosted by Jonathan B. ‘21, Nola M. ‘21, and Brandon K. ‘21. They opened the show with reenactments of classics from @spicybcsmemes, the crowdsourced Instagram page devoted to posting, as the name implies, memes relating to the Berkeley Carroll community. The hosts also sprinkled in some charades throughout the show, asking students to reenact classic books, like The Great Gatsby by F. Scott Fitzgerald, or famous movies, like Quentin Tarantino’s Pulp Fiction. In addition to @spicybcsmemes and charades, the show also featured a variety of trivia questions. Most trivia was about Berkeley Carroll teachers, such as: What vehicle did Ms. Moore own at one point in her life? For the record, Ms. Moore once owned a motorcycle.

This year’s first act was Alexandra C. ‘21, who kicked off the show with a singing and guitar routine. She played both The Ink of a Ghost by Jose Gonzalez and Video Games by Lana del Ray. The next act showcased Anthony R. ‘21, who played a piano solo by Franz Liszt entitled Waldesrauschen. Another act included one of the night’s hosts, Nola M., and Gabi P., who performed a roller skating routine to Havana by Camila Cabello. Brianna J. ‘20, Mary D. ‘20, Sierra M-C ‘20 sang Put Your Head on my Shoulder by Paul Anka and Home by Phillip Phillips. Shreya B. ‘21 diverged from the musical path and performed a classic Indian dance, Bharatanatyam, which she has spent over a decade learning and perfecting.

The second part of the Junior Variety show began with a “Muffins in Memoriam ” video, as the administration recently removed the mid-day muffins from the cafeteria. Chris K. ‘21 then sang The Periodic Table Song, published by AsapSCIENCE. Following Chris’s performance was the hit of the night: a video mocking the Hughes/Finigan American Studies class. The organizers of the Junior Variety Show recorded actual footage of the American Studies class after asking Dr. Hughes and Ms. Finigan to amp up their classic quirks, like Dr. Hughes’s overwhelming knowledge of The Clash and Ms. Finigan’s encouragement to all of her students to take her classes next year. The second act of the Variety Show also showcased Ms. Prescott singing Feeling Good by Nina Simone. Ms. Finigan and Caleb D. ‘21 also carried on the tradition of the Dunn siblings performing magic tricks at the annual Variety Show. The final two performances of the night featured the Acapella Club singing Michelle by The Beatles, and Oliver S. ‘21, Sean C. ‘21, and Antonio D. ‘21 performing John Denver’s Take Me Home, Country Roads.

Overall, this year’s event was a resounding success, raising over a thousand dollars for the Junior class. A portion of the funds will be sent to environmental charities, while the remaining money will be used to fund the Class of 2021’s prom next year.