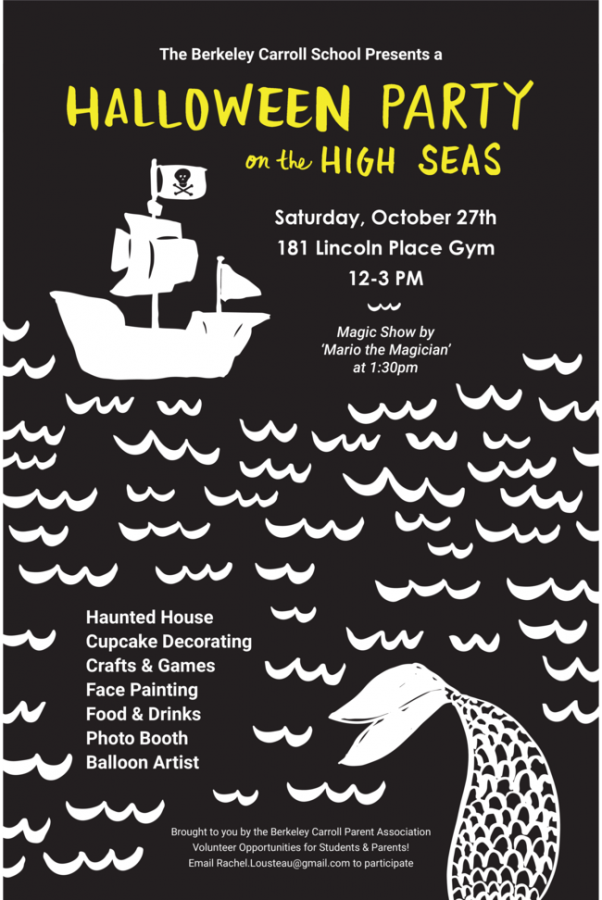 Halloween is arguably one of the most iconic holidays, with free candy, cool costumes, and trick or treating with friends. There’s little to complain about with this holiday. As you all know, Halloween was a couple of weeks ago, and what better way to get into the Halloween spirit than going to the Berkeley Carroll Halloween Party? The party was held on Saturday, the 27th of October, with upwards of 1,000 attendees. It’s safe to say that it was a huge hit.

The school was completely redecorated to make the perfect setting for a Halloween party. The gym was the main room, decorated to fit with the party’s pirate theme. Inside the gym was a massive pirate ship, as well as many carnival-style games and fun stations for children to visit. Some of the stations included a ring toss game, a Halloween wheel, a tattoo parlor, and a photo booth. It doesn’t end there, though. Larger stations were spread throughout the gym, and some had to be fit into different rooms. One of these stations was the haunted house, which was in the girls locker room. There was also a face paint station, where talented artists drew a multitude of animals, superheroes, and monsters on guests’ faces. The crafts station in the Upper School atrium was also a big hit. There were buckets of arts and crafts supplies that kids could use to decorate paper plates and make picture frames. The cafeteria was open as well, for guests to buy lunch tickets and have a delicious meal. There was a snack stand outside the gym that featured Halloween-themed treats, made by BC parents. There were also free juices, though they were relabeled as various types of blood, sticking to the Halloween theme.

The star of the party was Mario “the Maker” Magician. He attracted a massive crowd of parents and kids alike, who filled the gym with their clapping and cheering. His act ranged from sleight of hand to magic robots. Mario’s high energy attitude and clever jokes made for a great show and it seemed as though his audience couldn’t get enough of him. Half of the gym was full of kids and parents alike, who were eagerly volunteering to be part of the act, offering commands for his robot to do, or just participating in jokes.

We had the chance to talk to 6th grader Emmet S. about the event. Emmet was a volunteer, and when asked how he liked being a volunteer, he responded, “I love it. I get to help out everyone.” We were also able to speak with his fellow classmate, Dean G. Dean’s favorite station at the party was the cupcake station. “They got […] marshmallows, they got Smarties, they got gummy bears, they got sprinkles, and they have all the frosting you ever need.” While chatting with senior Jona I., who volunteered at various stations, we learned what it’s like volunteering. Jona said, “It’s exciting. You have to wake up pretty early, though. I’ve had to make hats, give tattoos, you know, things get done.”

The parents that put together the party thought that it was a massive success, and they were thankful to have a big team of people to transform 181  Lincoln Place into a different world. Rachel L. and Jen S. of the parent association gave us an inside look of what went into planning the party, and what made it such a big hit. They noted that the volunteers had a big role in the party’s success. Many aspects of the party were made possible because of volunteers and parents with different professions. They said, “Every year, I’m amazed that parent volunteers put together this incredible event. […] This year, [we] had some truly talented artists create pirate-themed decor—the mermaid lair in the entry, pirate ship In the gym and the transformation of the atrium into an undersea wonderland really blew me away.” Overall, the party was extremely fun to go to, and it seemed as though everyone was really enjoying themselves. The parent association did a fantastic job organizing this event. The parents would also like to thank Hicham, Miguel, Joe, Mr. Kent, Chef Bridget, and Mr. Budd for organizing and putting the party together.

Check out the gallery below for some pictures from the party!