An Inside Look at an Alumni Reunion 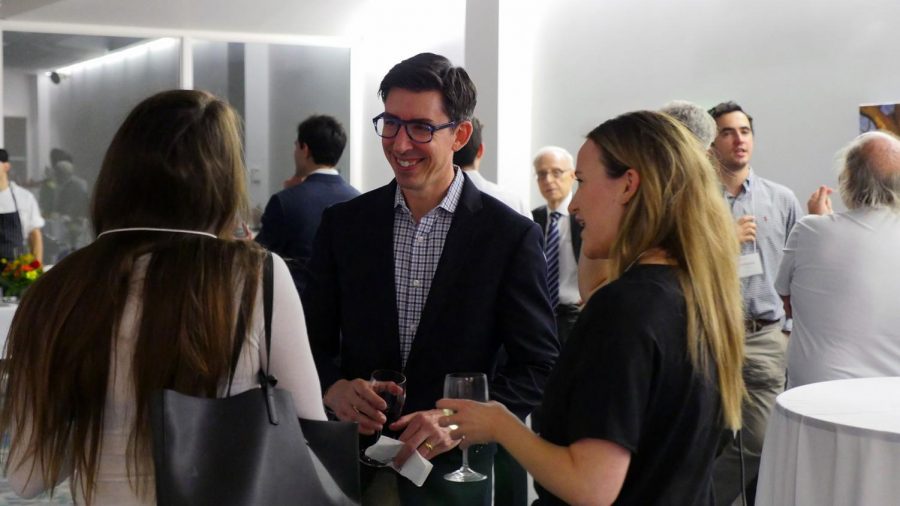 Have you ever wondered about how the people who have graduated Berkeley Carroll stay connected to the school? I have, so when I heard about an upcoming alumni reunion, I was intrigued.

On Friday, the 28th of September, there was an alumni reunion held at Berkeley Carroll. I was interested in hearing about what happened during the reunion and learning who planned it. On the Monday after the reunion, I had the pleasure of interviewing Ms. Jamie O’Regan, who is the Director of Alumni relations here at Berkeley Carroll, and who was responsible for planning this event.

For those of you who are unfamiliar with what this position entails, allow me to explain. The Director of Alumni Relations is a role that was created two years ago. I had a chance to sit down with Mr. Vitalo, who explained a little bit of history of Alumni positions at BC before this position was created. Before Ms. O’Regan started working at Berkeley Carroll, there was a part-time Alumni Relations position. Many events were held, but Mr. Vitalo explained that he didn’t feel like the alumni events got enough attention. Even after the development office became involved, he still felt like there needed to be more attention given to alumni events. Many alumni and members of the Alumni Board agreed. They felt that there needed to be someone whose job it was to plan and oversee events that involved Berkeley Carroll alumni, so they created the position of Director of Alumni Relations. Ms. O’Regan focuses on alumni engagement and acts as the bridge between current students and alumni.

Ms. O’Regan explained the four different ways that she and the Board of Trustees work to help strengthen the alumni community. The first of these is through community engagement. Community engagement covers a wide variety of events. Essentially, it all comes back to socializing—Community engagement events help alumni mingle and connect. The second way Ms. O’Regan helps to support the alumni community is by giving alumni opportunities for professional development. She informed me that it is important to offer alumni chance to help their professional lives and careers grow. The third way is allowing alumni have an opportunity to give feedback. “You only keep growing if people are willing to be honest,” is how Ms. O’Regan puts it. The fourth way Ms. O’Regan helps strengthen the bond between students and the alumni community is by having alumni talk about where they are now. This includes any way that the alumni can help showcase their lives after they graduate Berkeley Carroll to current students, faculty, parents, etc.

During my interview with Ms. O’Regan, she discussed into how she goes about contacting Berkeley Carroll alumni. These alumni range from people who graduated last year to people who graduated in the 1930s. Ms. O’Regan uses a large database to go about contacting the alumni to invite them to the reunions. The turnout for the reunions depends on the year. It can range from about 100 attendees (including faculty) to twenty attendees. This year, there were roughly 40 people who attended. Another cool aspect about the reunions is that there are awards given out. This year, they dialed it back to one award. That award was the “Distinguished Faculty Award,” which was given Dr. Marvin Pollock, who retired this year.

He had been teaching his Holocaust and Human Behavior course for over 45 years, and over the course of his time working at BC, had impacted the lives of many students. The reunions usually have food, cocktails, and soft drinks. There may also be a tour. At this reunion, the tour was a large portion of the program. A group of seniors showed the alumni the physical changes to the school, including the new wing added to the building. They were also given the chance to speak to the graduates about what it’s like to be a student now. Mr. Vitalo attended the reunion, too. He says, “It’s good to see kids—students—grow up.” He added on by remarking, “it’s really gratifying and it’s really interesting to hear […] everything that people are doing.”

On Saturday, the 29th, a Day of Service was held. Ms. O’Regan partnered up with Mr. Budd, the Director of Community Action, to organize a day where the Berkeley Carroll community could give back to our neighborhood and our environment. This took the form of a large park clean up, which consisted of litter clean-up, chipping old paint of fences, wall cleaning, weeding, and so much more. Parents, alumni, and current students were invited. Almost fifty people signed up to help out. What’s more, people who were simply just at the park offered to chip in and help out. Afterward, everybody went out to get pizza. Ms. O’Regan said, “It was a great way for us to show ourselves to the community a bit more. It was a good way […] to just reinforce how important it is to be active in the community  […] and why it’s important to give back.” 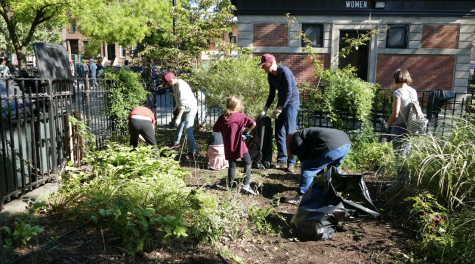 The events that Ms. O’Regan plans do not stop at reunions. For example, she has instituted a “speaker series.” The speaker series gives alumni an opportunity to hear a special guest speak to them about their career, life, and anything else they want to share. Ms. O’Regan also organized is a series called Beyond BC. In this program, she talks with, and organizes talks, with 12th graders about important life skills and other aspects of being an adult. Ms. O’Regan invites parents to these meetings as well. This, she says, can help the students talk to their parents about the meetings. “They [the parents] can’t really sympathize, but we want to give them to tools to empathize,” says Ms. O’Regan. She’s also put together a career day in which parents and alumni can showcase their jobs and talk with current students about how they got there. I asked Mr. Vitalo what his reaction was to all of these new programs, as well as other programs that he’s worked to create with other faculty members. He remarked, “I think we’ve pushed the program, and we’re really serving the students well. That’s what it’s all about. That’s the most important thing.”

In the future, Ms. O’Regan hopes to keep strengthening the connection between older alumni and the school by planning more events, more get-togethers, and, overall, just keeping graduates engaged. “We’re getting there, but it’s going to be a long journey,” says Ms. O’Regan. “We have nowhere to go but to grow.”