The Electoral College At BC: The Good, The Bad, and The Ugly 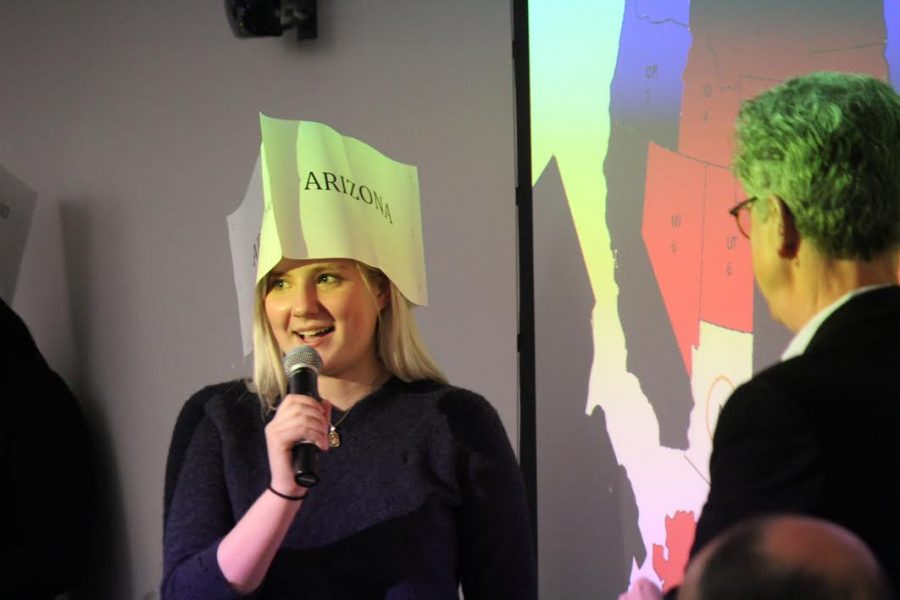 On October 27th, the entire Berkeley Carroll high school flooded the cafeteria at 10:10 per usual. But instead of eating muffins and bacon, students sat with their advising groups for a nail biting electoral college simulation that was organized by the history department (Mr. Swarthout, Ms. Heldring, Ms. Links, Mr. Stein, and Mr. Corfield). In an ongoing effort to help student understand the United States of America, its government and its ways,  Mr. Swarthout said the simulation was designed to “explain the mysteries of the electoral system which seems to be creaky, cranky, and outdated.” His views were echoed later by many students in the assembly.

The electoral college is a system, rooted in Federalism, where each state gets a number of votes based on their population and the party that wins that state will receive the votes in a winner-takes-all, except for Maine. A candidate needs 270 electoral college votes to win the election. Each advising group represented a state or two and the strongest twenty red states and twenty blue states’ electoral votes were displayed. Those that were swing states were called forward and flipped a coin to see if they would go red or blue—truly showing how unpredictable elections, particularly this one, has been and will be. Asya Alekhina ‘17 brought up the incredibly interesting point that for the first time in many, many years Texas, once a Republican stronghold, is a swing state and should have been included in the coin toss.

The coin toss came down to one state—Pennsylvania with 20 electoral college votes. It was tied at 259-259 and with the turning of the blue coin, the fate of our mock election was pronounced. “Jill Stein! No, I’m just kidding, Hillary Clinton!” said Nat Dunn ‘17 representing Pennsylvania. The Democrats had won and the students were out of their seats cheering.

After this, many students expressed how they felt about our voting system. Nat said that the electoral college system might discourage voters to vote because they feel like they might not have a voice or it won’t change anything if they live in an overwhelmingly red or blue state. Renata Bourin ‘20 pointed out how she felt it was problematic that the popular vote wasn’t in place. Many agreed, saying that the electoral college and their systems prohibit many people (particularly minorities’ voices) from being heard. However, one thing was absolutely clear by the end of the meeting. No matter the system, your vote is absolutely essential and in some swing states one vote can make the absolute difference. So if you can, please, vote.