“I Had a Blast!”: BC’s 2nd Annual Spring Intensives Program 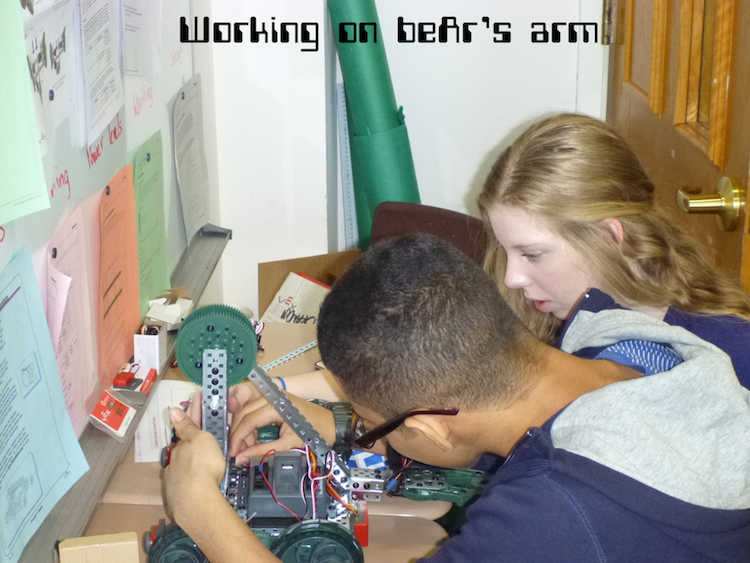 Over the last two weeks, the Berkeley Carroll Upper School engaged in its innovative Spring Intensives program for the second time. For two weeks, students and teachers alike took a break from their standard academic curriculum, and either took or taught one special class for two weeks, which didn’t necessarily fit into any one of the core academics. The classes each included a good mix of students from grades 9-12, and tackled a variety of unique topics. Many intensives remained from last year, including Human Origins and Living On the Edge, but many new ones also emerged, like Music and Technology and The Physics of Sports. See below for a complete list and description of this year’s twenty-one spring intensives.

Every weekday began with a morning meeting at Sterling Place, in which two-to-three intensives presented on what they’d been doing, just like last year. Immediately following these presentations, classes took place from 9:00am to 3:35pm, as students engaged in lectures, discussions, labs, rehearsals, sports games, field trips and more. While some students dissected sheep brains, others read Dostoevsky’s Crime and Punishment, and still others saw Mathilda on Broadway. As part of their intensives, many students went abroad to India, France and Spain, to study language and culture or do community service, and we should hear more about their experiences once they return.

The students loved the variety of activities. “I really liked meditating and doing yoga!” exclaims junior Ana Inciardi, who took the intensive on Neuropsychology. Senior Ricky Fernandez, who took the intensive on business and the American economy, loved visiting Goldman Sachs above all else. As he explains, it was his favorite experience because it gave him a new perspective on a firm that’s often vilified: “I think that, with Andrew Sorkin’s account in Too Big to Fail [which all students in the business intensive read], we get a negative portrayal of Wall Street, [but then] we actually got to meet the people leading Goldman Sachs…We actually got to meet the managing directors there and they spoke to us about the firm and their values and that sort of thing, so it painted a very diverse, fair image of it.”

Teachers, too, loved and learned from the experience and the activities it included. “I had a blast!” exclaims math teacher Ms. Chow, who co-taught an intensive on the history of New York with Latin teacher Ms. Durham. “In preparing for each day, I learned so much about the history, architecture, demographics, and topography of NYC. While physically challenging at times to complete our daily two (or more) miles, the patience and encouragement of the group kept me going. Much appreciation to the Walking Broadway students and to Ms. Durham!” Others had similar experiences. At the closing assembly, math teacher Ms. Brandon, who co-taught the Robotics intensive, said that she was amazed by the wonderful teamwork of her students as they set to build and program robots. History teacher Ms. Links, who co-taught the intensive on Homelessness in NYC, commented on how interacting with homeless (and sometimes parentless) children gave her a new perspective on the issue of poverty and its tole.

In addition to a variety of different topics and activities, spring intensives also provided a narrow focus which students loved. It was, after all, just one class for two weeks. As sophomore Henry Pearson explains, “I was focused upon one thing and one thing only. I wasn’t trying to go all across the board…It was nice to be able to focus on something you like.” Students fortunately chose their intensives beforehand, so that everyone really wanted to be there. As Henry adds: “One of the biggest things is that you get to choose, more or less, which spring intensive you’re in. I mean, all of them are great, but you get to choose which one interests you most.” Senior Olivia Cucinotta agrees. “It helps,” she explains, “that everyone here signed up for this course, wanted to be here, and wanted to work through these ideas.” Choice was pivotal, and it let students pursue their distinct interests. Ricky, for example, chose the Taking Care of Business intensive because it’s his passion. “I plan on studying business in college,” Ricky explains, “and I wanted to get a bit of a head start, and have fun doing it.”

Students valued the unique schedule as well. “It’s a two weeks well spent,” argues sophomore Kirsten Ebenezer, who took the Neuropsychology intensive. “Even though we’re not following the regular schedule, school-wise, I feel like we’re learning more in a way than we do in two weeks of school otherwise.” Other students agree. “We got really in depth in something that you don’t really get to talk about that often,” senior Ian Miller explains, “and I learned a lot that you just don’t get to touch on in the average curriculum.” However, the curriculum and schedule weren’t all that distinguished spring intensives from regular school.

Nearly every intensive was taught by a unique teacher pair, with a specialized curriculum that the teachers had begun preparing almost a year beforehand, since the last spring intensives ended. Different (and often unlikely) teacher combinations gave rise to dynamic duos: a physics teacher and an athletics coach, a history teacher and a dance instructor, an English teacher and a member of the Tech Department. These teacher combinations and more further pulled the learning-teaching experience out of the normal routine, and most students relished the exotic combos. When asked about his intensive on Human Origins, Ian Miller commented: “You know, it was with the Smith duo, which was really cool.” Other students thought that having a teacher pair really contributed to the learning experience. “Having two teachers gives two different sides to the class,” explains junior Ana Inciardi. It brought a nuanced collection of expertise in different areas together so that topics were taught from many angles.

The experience concluded this past Friday, March 14th, with a closing assembly in the 181 Lincoln gym. We saw the Music and Technology intensive perform two songs for us, “shredding” their instruments using nothing but iPads, which was awesome, and we heard from various teachers and students about their experiences over the past two weeks. Then, working as teams, each intensive took a multiple choice quiz on certain facts about the other intensives that they had learned from previous morning meeting presentations, and the winners received a variety of funny prizes (including a mento inside a water balloon!). The assembly then concluded with some closing words from Mr. Vitalo on the success of the spring intensive program, and we all went off to our spring break. Berkeley Carroll’s second annual spring intensives program was a great pleasure, and teachers have already begun to plan next year’s intensives.
Here is a list and description of this year’s spring intensives:

Art & Identity – Unleash your Identity through Art: In this intensive, students explored how the identities of different artists influenced their works. Each student researched a particular artist in depth and produced a piece inspired by his or her work.

Cap d’Ail: Ciel et Eau: In this intensive, students prepared for and then set out on a trip to Cap d’Ail, France, to immerse themselves in the French language and culture.

Granada: Sol y Nieve: In this intensive, students traveled to Granada, Spain, and engaged in Spanish language and culture.

Homelessness in NYC: Policy, Politics, and Empathy: In this intensive, students traveled across NYC volunteering at soup kitchens and shelters, and then discussed at length what they had learned and how the United States should understand and tackle the problem of homelessness.

Human Origins: From Australopithecus to Homo sapiens: In this intensive, students studied the evolution of the human race. As a group, they also designed a website that served as a means to educate 5th graders about human origins and all they’d learned.

India: Culture, Politics, Development: In this intensive, students studied Indian history, sociopolitics and culture, and then actually traveled to India, where they stayed with different families and did community service.

Japan in the Age of Samurai: This intensive taught students the history and cultural evolution of the Edo period of Japan, an age of feudal lords and samurais. Students ended the course by writing a paper on Japanese history and culture.

Living on the Edge: In this intensive, students read and discussed Jon Krakauer’s Into Thin Air and other anecdotes of utter survival, in which survivors pushed themselves to their limits. Building off of what they learned, this intensive will go hiking in the Adirondacks Mountains as a group in April.

Music and Technology: In this intensive, students explored the modern art of making music with technology. They used various apps and devices to create their own beats, mixes and songs, and performed some of their work live for the whole Upper School during the closing assembly.

Neuropsychology: My Brain/Myself: In this intensive, students learned about the difference between the mind and the brain, the nature of free will and the underlying causes of depression, anxiety, addiction and other disorders. Each student wrote a paper and presented on a particular topic of their choice.

Physics of Sports: This intensive involved both labs and sports games. Students studied the key physical principles at work in various sports plays, and put their knowledge to good use, seeking to understand how they could use this knowhow to better their performance in different sports.

Reading Dostoevsky: In this intensive, students read and discussed Fyodor Dostoevsky’s classic novel, Crime and Punishment. They read in various places, including the Rose Reading Room in the New York Public Library, Bryant Park, and multiple cafés. They also watched different movie adaptations of the work, including Woody Allen’s Match Point, and discussed whether they worked.

Robotics: Programming and Mechanical Design: In this intensive, student pairs built and programmed their own metal robots using kits. They equipped their robots with wheels and claws, and had them partake in a variety of special tasks and races.

Run the World – Girls? Girls!: Construction of Gender: Students in this intensive discussed the construction of gender norms in society, in toy and fashion industries as well as in education and throughout American culture.

Taking Care of Business: The American Economy: In this intensive, students studied linear programming and micro and macroeconomic principles and practices. They read Too Big to Fail and each produced their own business proposals, using what they had learned.

Tanzania: Leadership and Social Action in Context: Students in this intensive studied Tanzanian history, socioeconomics and culture in preparation for their trip to Tanzania this coming June.

The Living Newspaper: A Vehicle for Social Change: In this intensive, students learned about how they theatrical productions have been used to tackle different social injustices. They wrote and performed an original screenplay that shed light on the misconceptions surrounding mental disabilities like depression.

Think! Write! Shoot!: Students in this intensive looked at how they could communicate complex and multifaceted topics through film. They each proposed different ideas for a film, and then selected freshman Jordan Lisi’s screenplay to film and produce.

Walking Broadway: NY from Bowling Green to the Bronx: In this intensive, students learned about the history of New York City’s oldest streets, and discussed how and why the city has changed over time. To fully understand the context of these streets, they actually traversed all of Broadway over the coarse of two weeks.

What is a Brooklynite?: Students in this intensive looked at various works of art and literature in an effort to figure out what it means to be a Brooklynite. They traveled to various key areas throughout the borough and each produced their own unique art project that sought to define a Brooklynite.