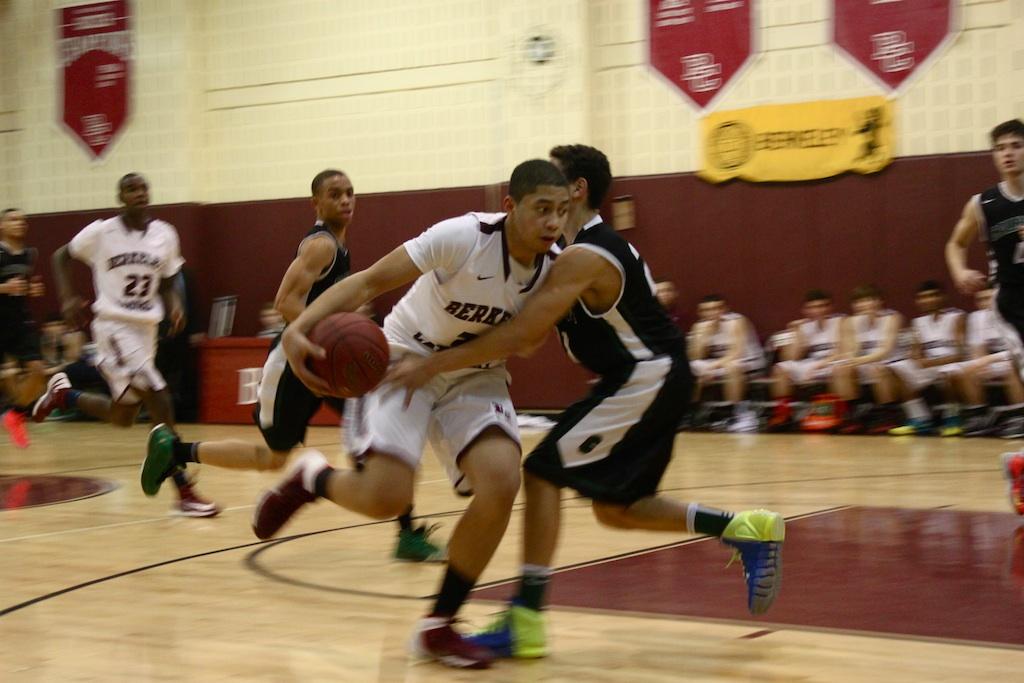 The Berkeley Carroll’s Boys Varsity basketball team has had a very successful season, making it to the semi-finals of the ACIS championships. They are now the second seed in the NYSAIS State tournament!  The Lions started their campaign on an 8-game winning streak, beating Florida powerhouse St. Andrews as well as familiar rivals such as Friends Seminary, Staten Island Academy and Dwight. The Lions 8-game streak was ended after a loss to former NYSAIS champions and Ivy League powerhouse Collegiate. After a two week break following their loss to Colliegiate the team made a trip to Brookville, New York to take on the 33rd ranked  High School Basketball team in the country, and the number one team in New York State , the Long Island Lutheran Crusaders. The Lions suffered a 92-54 loss to the Crusaders but fought hard throughout the game against the top ranked opponent. After the game Junior center Danny McCormack said, “It was a learning experience for all of us and I think this game has helped us mature and be prepared for ACIS play.” After the Lions upsetting defeat to the Crusaders they went on to win four out of their next five ACIS showdowns, beating SIA, Packer, Brooklyn Friends and St. Anne’s. They were suddenly first in the ACIS standings. The players and coaches were excited, looking forward to the second half of the season, the playoffs and hopefully an opportunity to play for a NYSAIS championship. Sophomore team member Ryan Hubbs said, “It’s really been a great season so far and we hope to maintain our energy and chemistry throughout the rest of the winter. And some of us have to pick up the slack now that Shaun is out.” Hubbs is referring to the Lions starting shooting guard Kashaun Hicks, who was sidelined for the rest of the season due to a torn meniscus suffered during a game early in the season. “Shaun was obviously a big part of our team and not having him is a blow to our season, but I think with the talent we have well be able to bounce back and be resilient and I know Shaun will still be a big part of our team this year and will be by our side the whole time,” said junior Chris Harper.

The Lions concluded the regular season with a league best 18-4 record, while winning the regular season ACIS championship for the first time in Berkeley Carroll’s history. The Lions made it to the semi-finals of the ACIS tournament, but suffered a heartbreaking 65-64 loss to Leman Prep, on Thursday, February 20th, which featured a controversial shooting foul called with 2 seconds remaining. The Lions now look forward to the NYSAIS State tournament, and have earned the second seed. The bracket for the tournament was released Sunday night and the Lions will face-off against Trevor Day School in the first round. This will be rematch of a pre-season scrimmage in which Berkeley outscored Trevor Day by 30. The quarterfinal showdown will be held at Packer on Wednesday, Febuary 26. With a Lion win and a Leman Prep victory the stage is set for a ACIS semifinal rematch in the semifinals of the NYSAIS tournament. Come out and support your lions in their quest for a state championship.