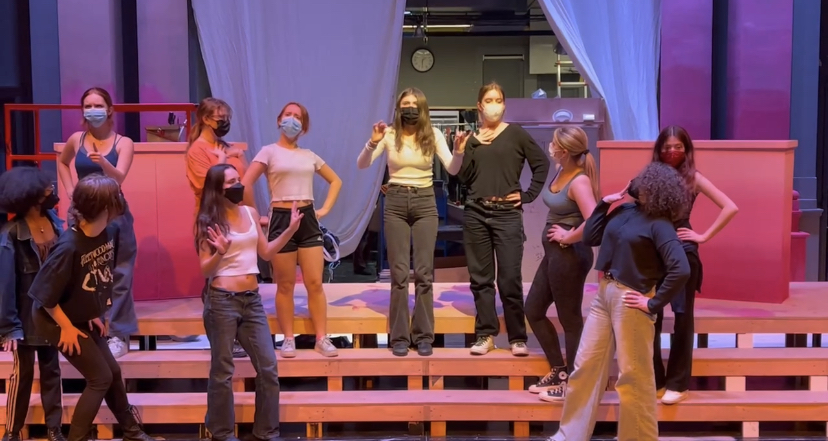 Getting back into the groove has been challenging this last year. Although the Berkeley Carroll theater Department put on productions when the school was in hybrid learning, it just didn’t feel the same. Now that (in-person) school is back in session, the theater productions are thriving while working through the challenges of COVID-19.

Director WT McRae says that this year’s production is particularly exciting because “it’s sort of the opposite of where we were a year ago at this time.” They detailed that although it’s great to be back on the real stage, there are still some challenges to work through given the predominant stress of the pandemic. For instance, the mask-mandate affects the cast’s vocal projection and shields their facial expressions. The cast and crew also lost 15 hours of rehearsal at the beginning of the semester due to the school’s remote response to the Omicron variant.

Considering an optimal perspective on executing the first in-person high school musical in years, last spring, the school ran a vote to determine this year’s musical. Students and faculty had 12 options, and after several rounds of voting settled on Heather Hach’s Legally Blonde.

Legally Blonde is a familiar, comedic storyline, and whilst the story is a good laugh, some morals run deeper than humor. McRae says that it has “a really interesting thread running through this piece about identity, gender, and cultural expectations.” The plot follows protagonist Elle Woods as she navigates a prestigious law school and encounters archetypal characters that enforce repressing gender and class binaries.

(SPOILER ALERT) In the end, Elle realizes that A) her self-worth should not depend on mens’ opinions of her and B) that she too can be a good lawyer and be taken seriously in her pink stilettos. Elle serves as an influential, feminist character because she retains her integrity, despite the judgment of her peers and mentors. McRae says that “Legally Blonde is a story of unyielding ambition, perseverance, interdependence, and self-acceptance.” Elle challenges the idea that one cannot be successful without subordinating their ethics.

Whilst opening night is right around the corner, that doesn’t mean that the added stress from COVID-19 related regulations and setbacks are at all alleviated. However, the theater department has been putting in the work and effort to make this show exactly “What You Want” [1].