The Berkeley Carroll Blotter • May 7, 2014 • https://bcblotter.com/showcase/2014/05/07/the-grand-budapest-hotel-andersons-greatest-storytelling-feat/ 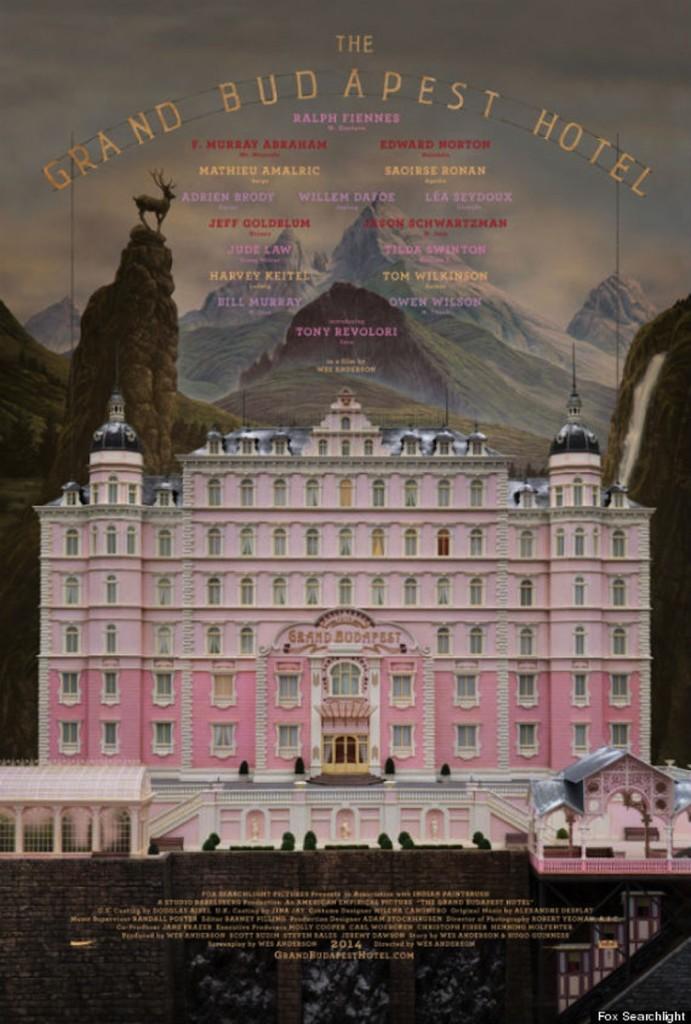 Before I sat down to write this review, I racked my mind to see if I could remember the last movie I enjoyed watching as much as I did Wes Anderson’s new film, The Grand Budapest Hotel.  While there are movies I’ve seen that have provoked me to think more and that have had better acting, I couldn’t think of a film that I’d watched recently that gave me a cumulatively better viewing experience than The Grand Budapest Hotel.

Anderson builds his film in layers.  He opens with a young girl paying tribute to an author at his grave. Going one layer deeper, Anderson introduces us to the author (Tom Wilkinson), who recounts a time when his younger self (Jude Law) met Zero Moustafa (F. Murray Abraham), the owner of the Grand Budapest Hotel in which the author was boarding. Moustafa invited the author to dinner, and began to tell him the story which makes up the bulk of the film.

After peeling back yet another layer, we find ourselves following a young Zero (Tony Revolori) when he was just a lobby boy.  Zero finds an odd sort of apprenticeship with Monsieur Gustave (Ralph Fiennes), the head concierge at the Grand Budapest.  It is the 1930s and the hotel is thriving under the supervision of the eccentric M. Gustave. M. Gustave does as much as he can to ensure that his guests have the best possible experience, including sleeping with several of the elderly women staying at the hotel.  One particular woman who enjoys the company of M. Gustave is Madame D. (Tilda Swinton), who dies early on in the film.  At the reading of her will, Deputy Kovacs (Jeff Goldblum), the executor of Madame D.’s estate, leaves a painting called “Boy with Apple” for M. Gustave.  This sets the story into motion as we are introduced to the members of the D. family led by Dmitri (Adrien Brody), Madame D.’s evil son, along with his nefarious henchman, Jopling (Willem Dafoe).

What follows is a thrilling story filled with prison breaks, friendship, love, macaroons, ski chases, murder, celebrity cameos (Jason Schwartzman, Harvey Keitel, Bill Murray, and Edward Norton just to name a few), fascist invasions, and an almost melancholy tone beneath all of the excitement.  The film’s leading man, Ralph Fiennes, does a phenomenal job and gives a far funnier performance than he does in some of his previous roles such as Amon Goeth in Schindler’s List or Lord Voldemort in the Harry Potter series. Tony Revolori’s role as a loyal and naive lobby boy is also the perfect compliment to Fiennes’s madness, making them an excellent comedic duo.

As much as I enjoyed this film, if you don’t like Wes Anderson’s style you will not like this movie.  However, if your reason for not liking his style is that “it’s too unrealistic,” I have to disagree.  He intentionally makes his films in this way; his goal isn’t to immerse his viewer in a world, but to simply tell a story. I always thought of Wes Anderson films as unique, but I never truly thought about why.  After some consideration, I think I figured out what sets him apart. Some great films are fully immersive and sensually overwhelming, as if you were sitting in a museum’s planetarium. But Anderson’s films are more like dioramas.  When watching the Grand Budapest Hotel (or any other of his films), you are constantly very aware that you are sitting in a theater watching a film.  His style of storytelling doesn’t rely on dragging the moviegoer into the action, but treating them as an outside observer. That is why I don’t think any one of his movies will ever be remembered as a classic or masterpiece; they simply aren’t.  They lack the depth that makes great films great, but if he were trying to make a masterpiece, he wouldn’t make his films the way he does. His goal seems to be to show his viewer a good time rather than to change their life. I’d highly recommend seeing The Grand Budapest Hotel.  Even if it doesn’t change the way you perceive life or do something else that has become a qualifier for being a great film, I’m sure you’ll enjoy it just the same.