The Importance of Tolerance 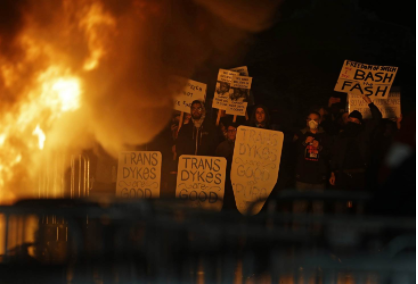 If you’ve had the summer I had, then I’m sure you’re mentally exhausted. The amount of political tension in the air was (and still is, mind you) palpable almost to the point of discomfort. I found myself getting headaches when I heard about conservatives and liberals clashing over events ranging from monument removal to repealing the Affordable Care Act. What stood out to me about these protests was the sheer lack of dialogue happening during them.  The two political parties never ONCE sought to start up a dialogue, instead, they resorted to violence and loud screaming. Not once did either side seek to understand the other. One example comes from the UC Berkeley protests against Milo Yiannopoulos. Protest grew violent after enraged students started breaking windows and lighting fires around the UC Berkeley campus. Instead of letting him speak to the very small niche of far right extremists at the UCB campus, they prevented him from speaking as a whole. The fact is, you may not like what people are saying, but you have to let them say it. The biggest problem that our country faces today is Republicans’ lack of understanding for Democrats, and vice versa.

This type of political insensitivity is the issue I see with many people at Berkeley Carroll. We are willing to talk to anyone regardless of the color of their skin, their sexual orientation or religion, but we shut down the moment they express a different political opinion then we do. Neither party has ever sought to extend an olive branch to the other side to understand their point of view. This is where Berkeley Carroll fails in preparing us for the outside world. Because we live in the BC bubble, we have no idea of how to deal with people who have varying beliefs then we do. Any time someone stands against our ideals, they are either too scared to speak up, or are bashed on social media. Personally, I blame the advent of social media for these immature and childish Facebook updates and Instagram posts. For starters, it is never okay to make someone feel less then because of  their political beliefs. Someone’s political opinions are a product of the household they grew up in and the values that their parents instilled in them at an early age. The  fact is, shunning someone because of them won’t help with understanding and dialogue. It has become too easy to bash people online, instead of to their face. Talking is person has been replaced by snarky instagram posts and down right aggressive facebook comments. This prevents a dialogue, and more importantly understanding and education, from happening. Sadly, it’s this small mindedness is what causes assumptions to be made. For example, someone who voted for Donald Trump is not automatically a racist. While yes, the far right has used him as an excuse for their xenophobic and disgusting rhetoric, others voted for him because they might have thought that he would be able to revive the rustbelt region of the United States and better secure their jobs and livelihood.

The lack of understanding is also why the art of compromise is dead. In congress, our congressmen and women never seek to talk to the other side about pressing issues. This just creates political gridlock, and prevents things from ever getting done. While there are some things that should never be compromised on, such as the advancement of Civil Rights, we have to see that some policies could be amended to serve more people, and more importantly keep the policies inclusive and fiscally responsible.

Now, I am under no circumstances saying that you need to go out and hug everyone who does not share you same political opinions. I am just saying that we need to start a dialogue with those who are on different political planes than we are. If not for ourselves, then for the future generations of Americans.