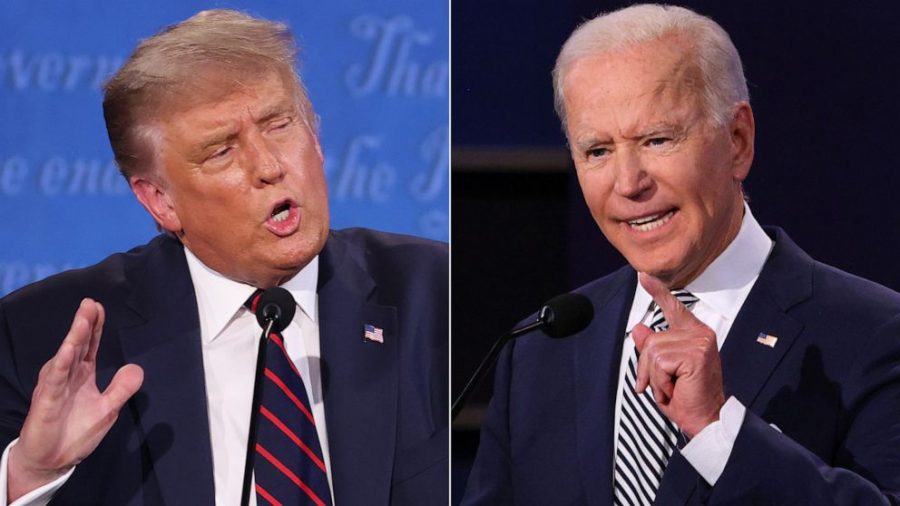 Joe Biden and Donald Trump at the first presidential debate on Sept. 29, 2020/via AP on ABC News

With the constant barrage of news, I’m finding it hard to remember the basic facts of what has happened in the 2020 Election so far. Now that we have reached Election Day, I thought it would be helpful to write a quick summary of it (Disclaimer: I’m not going to go too far in-depth into every event. There is much more to say about these topics but I am trying to summarize them in this article. Also, I am aware that I tend to lean left. I tried to write this as unbiased as possible, but I acknowledge that it may not be completely fair.)

March 3, 2020: Super Tuesday took place. The results of the democratic primaries included Biden winning 10, Sanders 4, and Bloomberg 1. Donald Trump won all of the Republican primaries, 13 in total. Bloomberg dropped out on March 4, leaving the Democratic Party race between Biden and Sanders.

Mid-March, 2020:  The Coronavirus pandemic hit the United States. In February, the President had stopped travel between the U.S and China, where the virus originated. However, most of the cases ended up coming from European countries. On March 13, Trump declared a national emergency and signed a stimulus bill to assist in reversing the effects of the pandemic. By the end of March, the U.S had more cases than any other country. By this time many businesses and institutions were temporarily closed. These closures caused a major impact on the economy, small businesses, and many people who were left with less than enough money, no jobs, and many other hardships. Around April, masks started to be widely used, although not by the president.

May 25, 2020: George Floyd was murdered by a police officer in Minnesota. Both peaceful and violent protests began. Many police troops responded with violence, injuring many people across the globe. Trump infamously responded with a tweet saying “…when the looting starts, the shooting starts,” This was originally said by the Miami Chief of Police Walter Headly during the Civil Rights movement in the 1960s, who was an open opponent of the movement. The President later stated that he was not aware of the history behind the statement.

June 2020:  Both candidates began having rallies again, although by the end of the month Biden stated that he would be putting a moratorium on his, due to the risk of infection.

August 17, 2020: Kamala Harris was announced as Biden’s candidate for Vice President. It was also the first night of the Democratic National Convention, which ended on August 20th. The speakers included Nancy Pelosi, Barack Obama, Hillary Clinton, and Andrew Cuomo. On the same day, the chief strategist of the White House, Steve Bannon, was arrested for defrauding money from many people who donated to the We Build A Wall Fund.

August 23, 2020: Jacob Blake, a 29-year-old black man, was shot by police in Kenosha, Wisconsin. This induced many protests, as well as many sports teams canceling games in protest. Both of the Presidential candidates later visited the aftermath of the protests.

August 24, 2020: The Republican National Convention began. It lasted for four days and some of the people who spoke were Melania Trump, Mike Pence, Donald Trump Jr., and Mike Pompeo.

August 29, 2020: At a protest in Portland, an argument erupted between Black Lives Matter supporters and Trump supporters. A conservative man named Aaron Danielson was killed, in addition to several others being arrested.

September 9th, 2020:  Bob Woodward, a writer and journalist who covered much of the news when Watergate happened, released an interview with Trump in which the President talked about how he knew about the dangers of coronavirus in early February but did not want to “panic Americans” by telling them this fact. He also discussed how the coronavirus would be dangerous even to children, which contradicted some of his previous statements concerning reopening schools.

September 18, 2020: Justice Ruth Bader Ginsburg died of cancer at 87. Senator Mitch Mcconnell announced that the spot would be filled as soon as possible, while Democrats argued that since her death took place during an election, the person who won the election should be the one who nominates a new justice. This was an echo of 2016 when, during the last presidential election, Justice Scalia died. The same argument happened between the different parties, although it was the opposite. In the end, Obama did nominate Merrick Garland as the new justice, but he was not considered by the Senate. As a result, the winner of the 2016 election was able to nominate a new candidate to fill Justice Scalia’s seat.

September 27, 2020: The New York Times released twenty years worth of Trump’s tax returns. Among many things, they indicated that he has only paid income tax for 5 out of the past 15 years. When seeing this, Trump said that it was “fake news.”

September 29, 2020: The first Presidential Debate was held. Throughout the night both candidates were somewhat unprofessional, as they were interrupting and, in some cases, shouting over each other. One of the pivotal points of the debate occurred when Trump was asked about white supremacy and refused to condemn it. After the question was first posed he asked “Well, what do you want me to call them?” Biden responded with “Call them Proud Boys,” and to this Trump said “Proud Boys, stand back and stand by. Somebody has got to do something about Antifa and the left.” The Proud Boys are an all-male white supremacist group, who have made statements enforcing mysoginistic, homophobic, transphobic, and racist views. On several occasions, members of the group have been guilty of committing violent crimes towards people attending anti police profiling protests. Antifa is a group of Democrats, attempting to end fascism, racism, sexism, homophobia, and xenophobia. They have participated in both violent and non-violent protests.

October 1, 2020: Both the President and the First Lady tested positive for coronavirus.

October 2, 2020:  The President was admitted to Walter Reed Hospital. He was treated with remdesivir, an antibody cocktail, and a steroid called dethamexazone. He reported having a cough, some congestion, and being tired. Later, he had a fever, and he was given supplemental oxygen several times. However, both the White House physician and the President remained optimistic about his recovery. During his time in the hospital, he did leave to greet several of his supporters through a car. He was accompanied by Secret Service agents, and thought they were all were PPE, some reported feeling unsafe. Several other politicians who attended either the prep for the debate or the nomination ceremony for Amy Coney Barrett also tested positive, including Chris Christie, Mike Lee, Kellyanne Conaway, and several members of Trump’s personal staff. However, Biden, Pence, and Barrett all tested negative. Due to the President’s diagnosis, the Debate Committee makes the decision that the second debate will be held virtually. Biden agreed to this plan, but Trump refused. Finally, the second debate was canceled. In place of the debate, both candidates held a Town Hall meeting.

It is now Election Day. I’m sure many students and faculty of Berkeley Carroll will be watching. I don’t know what the election will bring, but I hope reading this has been a helpful reminder of the events of the election, as of right now.