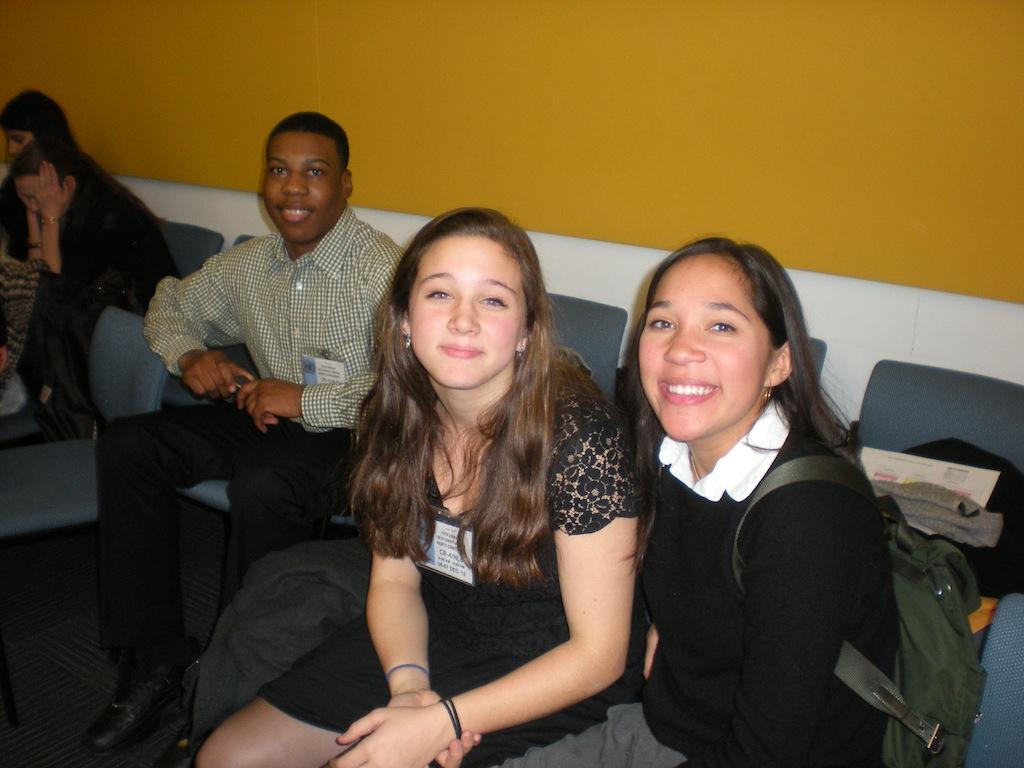 It was Wednesday, December 5th, and Berkeley Carroll students and faculty were discussing the seniors’ last UN Conference of their high school careers. “It’s a little bit sad,” said senior Allie Jane, “I have so many memories from the conferences I’ve been to.” Senior Anya Katz remembered her past UN Conferences with fondness as she prepared her report for the 2013 UN Conference on Human Rights. “I loved hearing the voices of different students at the conference,” said Anya, “I learned a lot from simply talking to students from unique schools and backgrounds.”

The annual student-driven United Nations Conference kicked off its three-day event on December 5th, and Berkeley Carroll was well represented with fourteen attendants. Several students from Alberta, Canadajoined the BC United Nations Group at BCS’s World Affairs Breakfast Club on Wednesday morning as well; the entire group discussed the environmental consequences of the Keystone XL Pipeline before wrapping up their written reports and looking over their notes for the conference. Senior Kayla Young recounts the many hours spent in preparation at Berkeley Carroll as she and the other participants finalized their statements and sub-topics: “We’ve talked a lot about the sub-topics and themes for the conference,” said Kayla. “We’re pretty confident that we’re the best prepared school there.” Aiding Berkeley Carroll in their assignments were the visiting Canadian students. Mustafa Abbas Ali, a moderator at the conference and one of the students from Manitoba, Canada, was especially excited to be visiting New York City for the first time. “It’s a great opportunity,” he said, “I’m meeting so many different kinds of people and I’m learning so much… I’m glad that I got a chance to moderate at the conference, especially in one of the greatest cities in the world.”

The first day of the conference is customarily spent at UNIS, the United Nations International School, and the last two days are spent at the United Nations Headquarters itself, giving students a taste of the organization’s cultural history as they discussed issues centered around human rights. The sub-themes for the conference included Human Rights and Democracy, Minority Rights and Discrimination and Sustainable Development (with a focus on energy, water, and waste). An initial discussion on global human rights would precede a more detailed, complex review of the conference’s sub-themes at the United Nations Headquarters the next day. At the headquarters, there would be a much-awaited videoconferencing call with similar conference sites in Canada, Mexico and France.

Upon arriving at UNIS, the two hundred students who had gathered were treated to a cultural concert of dance, music and song, performed by UNIS students  Following this display of diversity, Richard Martin of UNESCO, Canada described conference protocol and group dynamic schemes that would keep the entire event running smoothly. The best was yet to come, as senior Kayla Young remembers: “The best part of the first day was hearing the panelists talk about their work… It’s such a great learning experience.” The first panelist was Human Rights Researcher Matt Easton, who spoke on his job as a researcher and how his advocacy for human rights focused on the protection of human rights defenders in Southeast Asia. “The most important thing in the fight for human rights is the presence of a democratic electorate,” said Mr. Easton. He explained the significance of having the country’s voice heard in government policies; he also stressed the impact of having a democracy, where the rights of the common man would not be taken for granted, since his voice could be heard at the official level. Following Mr. Easton was Public Information Officer Fred Kirungi, of the NY Office of the High Commissioner on Human Rights. Mr. Kirungi also stressed the importance of human rights, especially in poverty-stricken countries in Africa and Asia. Filmmaker Mary Jordan, Founder and Creative Director of ‘Word Above The Street’, later spoke on her recent venture called the Water Tank Project, where specific roof-tanks in New York City are selected to be covered in original artwork on the topic of water.

All the panelists made a great impression on the students present, and many were delighted to hear the speakers’ thoughts on their topic proposals and sub-themes the next day. After a grueling but rewarding first day at UNIS, the next day was to be spent working hard on individual project proposals at the United Nations Headquarters. Students took a tour around the historic buildings before meeting in the UN Assembly Hall to discuss their developing subject proposals on how to curb certain violations of human rights. Junior Eliza Liebler was especially excited about her own proposal on Human Rights and Democracy: “We worked really hard on the project proposal, but we’re also interested on what other people have to say on the same sub-theme,” said Eliza. There were several exciting new ideas that Berkeley Carroll had come up with for their project sub-themes. Amalya Schwartz, Elena Hirsch and Eliza Liebler headed the project on Human Trafficking, where they focused on poverty-stricken girls in urban settings who were forced into prostitution to fend for themselves. The students decided that the best way to attack such an invasive societal problem was to strengthen the foundations of anti-human trafficking agencies and create a special outreach program to aid the women. Another equally stirring topic was on Environmental Protection, where Sophia Timko and Allie Jane argued that it was a basic human right to live in clean, environmentally conscious surroundings. They focused their efforts on the Gowanus Canal Conservancy project in Brooklyn, and crafted a persuasive resolution for more funding toward canal conservancy projects.

The last day of the conference kicked off on December 7th at the United Nations Headquarters once more. Peter Launsky-Tieffenthal, UN Under-Secretary-General for Public Information and Communications, opened the meeting with inspiring opening remarks and a plea for the students gathered to continue spreading awareness for human rights. Adding onto Mr. Launsky-Tieffenthal’s remarks was Croatian diplomat Ivan Simonovic, UN Assistant-Secretary-General for Human Rights in the NY Office of the High Commissioner for Human Rights. “We must weave human rights into the work carried out across the UN system,” Mr. Simonovic asserted , “The three pillars of the United Nations Organization: peace and security, development, and human rights are interlinked.”

Finally, the students were allowed to showcase their project proposals with justifiable pride. As the many student groups came up to the microphone and delivered their ideas, the newly-dubbed “Panel of Experts” that consisted of the first day’s panelists and other dignitaries, voiced their opinions freely. “I think the best part of the entire conference,” senior Kayla Young recalls, “was the fact that these panelists gave us advice on our project proposals… The feedback we received from them was amazing.” The groups were then given time to mull over the criticism and comments they had received from the experts, and revised their project proposals accordingly before posting them online. Similar events were underway at the UN Conferences in Canada, Mexico and France; the students had presented their ideas before New York City’s Panel of Experts, receiving much the same comments and constructive criticism that had been given to the city’s own students.

The United Nations Conference on Human Rights for 2013 officially closed with a cultural tribute to the many ethnic groups that had gathered at the UN Headquarters and closing statements by the diplomatic luminaries who had aided the students in their project proposals. At the school debriefing following the conclusion of the conference, senior Amalya Schwartz sighed and said, “I’m going to miss this.”