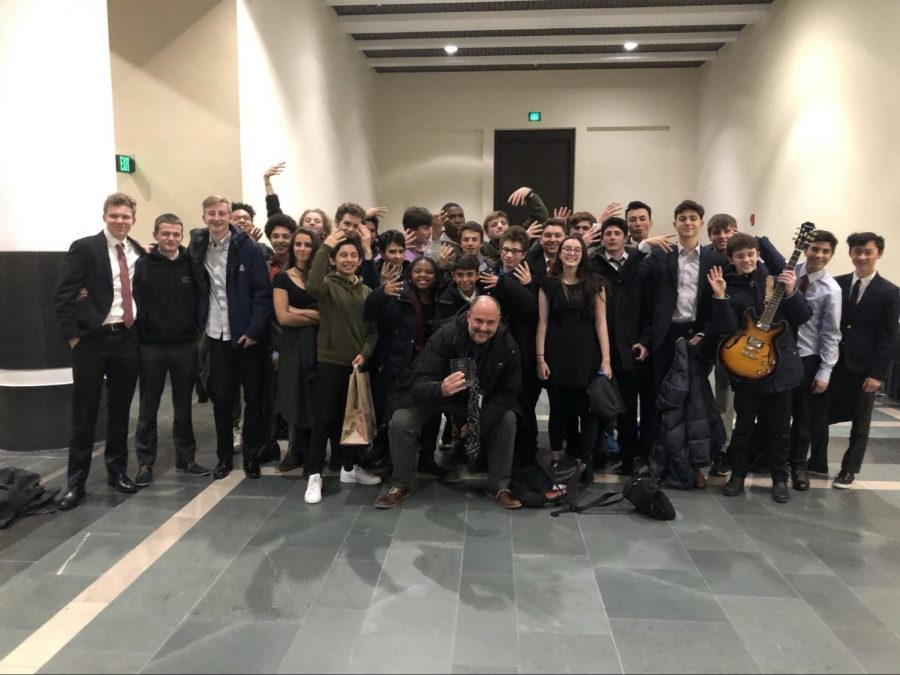 On Saturday, January 26th, the Berkeley Carroll jazz ensemble competed in the 2019 Berklee High School Jazz Festival in Boston. It was an experience that no one who went would ever forget. The day before the festival the jazz band left New York on a five-hour bus ride to Boston. Upon arriving at the Marriott Hotel, we checked our bags and instruments, had dinner and hung out until it was time to go to sleep.

The next morning everyone was dressed in concert attire. We checked out of the hotel and met in the lobby to leave for the concert. The building that the concert was held in was huge, and hundreds and hundreds of people were there. Schools from around the country attended, including Downey High School from California, Ransom Everglades from Florida, Pritzker College Prep from Illinois, and last year’s winner for our division, The Rivers School from Massachusetts, to name a few.

We warmed up and set up, trying to calm our nerves when it was almost time to play. Our time slot was 10:50 AM. After months of practice, we knew we were ready to play the selection of songs that Dr. Holsberg chose for us: The Queen Bee by Sammy Nestico, Send in the Clowns by Stephen Sondheim, and Doozy by Sammy Nestico. Dr. Holsberg explained to me how important a good selection of songs is in a jazz competition: “Figuring out three nice, contrasting works to show everything that the band can do and highlight the band in the best way that we can is a really important part of the trip.” According to Dr. Holsberg, we “hit it out of the park at the performance!” Everything came together really nicely. We blended very well, we hit all our entrances, the soloists did excellent jobs, and we were really on our game. After performing, we had a few hours to get lunch and hear other bands perform before the awards were given out. I went to hear the Berklee College Band, who performed an impressive arrangement of songs. When asked about hearing others perform, Dr. Holsberg remarked, “It was like sensory overload. We saw so many groups and got to see so many bands from around the country. It’s exciting because all of that energy that’s going into musical excellence is really an exciting thing to behold.”

The award ceremony started at 5:30, with the first awards being presented to various divisions, including the vocal bands, the small ensembles, and a few more. When the time came around to present the big band awards, we were all excited. 208 bands competed in the competition altogether, and our division was made up of 16 large ensembles. We were all eager and hopeful as the announcements were made. The room fell silent as the announcer began. “The award for honorable mention is… The Berkeley Carroll School, directed by Peter Holsberg. New York.” We all jumped up in joy! Out of the sixteen bands in our division, we received an honorable mention–In other words, we came in 4th place! This made BC the first NYC independent school big band to earn an award in over 10 years! “It’s a real honor to have that happen,” says Dr. Holsberg, “I was thrilled for everybody in our group because I got to see how happy everybody was when they called out our name.” We were all ecstatic, needless to say, and, like Dr. Holsberg said, we all went home very, very happy. 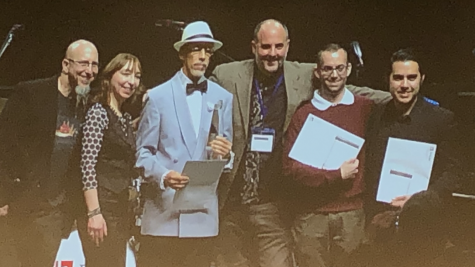 Dr. Holsberg and the other winners from BC’s division are called up to accept their awards.

An incredible amount of time and effort was devoted to making this trip happen. Including planning and transportation, making hotel reservations, transporting equipment, writing itineraries, and a lot more. Dr. Holsberg made sure to give special thanks to the administration, Ms. Smith and Mr. Rajai for helping to chaperone, and all the parents who came to the festival to watch. When asked how he viewed the experience as a whole, Dr. Holsberg said, “It was really a terrific experience from beginning to end. I think it was amazing for everyone.”