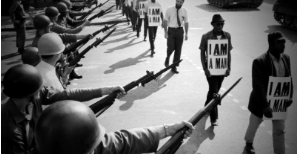 Neither slavery nor involuntary servitude, except as a punishment for crime whereof the party shall have been duly convicted, shall exist within the United States, or any place subject to their jurisdiction.

On January 31, 1865, after almost two and a half centuries, slavery in the United States is ruled unconstitutional by the 13th Amendment. Everyone, black and white alike, is finally deemed free by law. But wait; there’s a catch. If someone commits a crime, this amendment of freedom doesn’t apply to them. For those “duly convicted,” slavery and involuntary servitude never ended.

In “13th,” a film released in October of 2016, Director Ava DuVernay explores this loophole that has been exploited since the moment of its creation. DuVernay, who also directed the Oscar-winning film Selma, seamlessly weaves together past and present to investigate the age-old “mythology of black criminality” that is at the root of American mass incarceration today.

Over the course of the documentary, DuVernay, with the help of interviewees, including Angela Davis, Cory Booker, Henry Louis Gates, Van Jones, Newt Gingrich and Grover Norquist, gets to the bottom of how the problem of mass imprisonment came to be . What she discovers is a long history of black criminalization triumphing over humanization.

Following the renowned 13th amendment came our country’s first major prison boom. With the help of propaganda including the infamous film “The Birth of a Nation,” indelible images of black men as inhumane rapist beasts are propelled into society, leading to black people being arrested and even murdered under the assumption that they were partaking in criminal activity. Inspired by the convenient constitutional clause, black people across the nation are thrust into jails in massive numbers.

The Netflix Original begins with President Obama’s voice stating that “the United States is home to 5% of the world’s population but 25% of the world’s prisoners.” Unfortunately, this immense disproportionality in our prison system doesn’t stop there. While black men make up 6.5% of the population, they make up 40.2% of the national population behind bars.

But thank goodness all of that is behind us…right? Wrong. Towards the end of the film, Duvernay artfully juxtaposes video clips from history during the time of Jim Crow (including clips from “The Birth of Nation”) with clips from today, using President Trump’s voice to narrate the haunting similarities between our past and present.

Since the 19th century, incarceration numbers have only gone up. As of 2016, there are over 2.3 million people incarcerated, up from less than 360,000 in 1970. Furthermore, while white men have a 6%  chance of going to jail, one out of every three black men will go to jail in their lifetime, leading black boys everywhere wondering, “am I next?” Upon entry into prison, a life of involuntary servitude begins. We always reference the unethical labor of faraway countries, but the reality is in our very own country, prisoners are put to work producing cheap products that will be distributed for a large profit across the nation.

Although “13th” exposes policies and actions that contribute to the criminalization of black people in the US, such as the crackdown of law and order in politics, the disproportionate penalties of cocaine v. crack, and police brutality, one of the most astonishing revelations of the film is the reveal that it isn’t always our lawmakers who make our laws. Instead, it’s a powerful for-profit corporation called the American Legislative Exchange Council (ALEC). ALEC just so happens to be sponsored by, among other big businesses, Corrections Corporation of America and Geo Grouped, the two largest private prison firms in the country. ALEC, with the influence of its sponsors, is a major force responsible for many of our country’s harmful prison reform bills. The sole objective of bills such as the “three strikes” rule is to fill up prisons no matter what it takes in order to make money.

By creating a platform for the unheard and forgotten voices of our nation, DuVernay restores humanity to black people who are too-often presented as out-of-control animals in the media. DuVernay’s use of rap music and songs by almost exclusively black artists as a segue between scenes effectively conveys the deep emotion and long history of racism and mistreatment in America through art. By presenting certain statistics and quotations in bold, in-your-face lettering as well as graphic images of brutality, DuVernay ensures that we can’t ignore what is happening.

Although “13th” will induce poignant feelings, whether it be feelings of discomfort, guilt, grief, or anger, it is crucial that instead of turning our head the other way we make an effort to educate ourselves on the realities of our society. Available to stream on Netflix, “13th” is easily accessible by a large group of people, so if you are interested in politics, history, civil rights, or even just the world around you, open up your computer and take less than two hours out of your day to watch this incredibly well-done and important film that you won’t forget.